In the past two years I have written something about the other bands at the festival. This year I would like to share my own experience and tell about the band I play in.

Sweetwood is sort of around for six years this spring. I joined a band that had just started, as lead guitarist, after having been a rhythm guitarist for two decades. A bass player joined very soon after, Maurits. To cut a long story short, we are still playing together. Others have come and gone. Our drummer Cor is there for I'd say four years, our singer, having started as "background babe", Karen for three and our keyboardist Peter for one. After having been nameless for years on end, we had to pick a name to play at the Jammer Festival two years ago. That became Sweetwood, after the town we practice in.

The Jammer is the name of the shed we (all) practice in, a wooden, former, office of Rijkswaterstaat at a location where that organisation stored its winter salt. Nowadays the terrain itself is in use for all sorts of storage, the shed is cut into two practice rooms with nearly everything a band needs available for it to use. It is all led by Peter, a volunteer who doesn't play music himself but facilitates everything.

On Tuesday 29 June he was already building up the beer and hamburger stand in the pouring rain to make sure things were in place for Sunday. All the bands that played and practice here should give a big hand in gratitude of the dedication of Peter to make all this possible.

He was rewarded with beautiful weather, once again, and a big show of fans of the bands and others interested in hearing music by cover bands and bands playing their own songs. 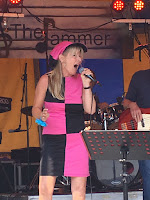 We were on a roll that last Tuesday while practising the seven songs we had selected to play, making up a good cross-section of what we do. More importantly we were able to carry that mood with us on stage. We were ready for it, as they say. Including some songs that had cost quite some time to perfect.

After Peter's announcement we kicked off with a Muddy Waters song. The familiar riff got a response straight away from the blues fans in the audience. Getting started is not so easy as it might look. In between bands is a ten minutes slot in which the previous band has to go, pack all its stuff while the new band plugs in. The backline is 100% provided, the mix is anybodies guess. We ran into some problems there during the show.

'Hoochie Coochie Man' is the ideal opener. Nothing really special goes on, while our singer Karen in her great new outfit can let it rip as soon as she feels like it, getting the mood going. The riff allows for moving along to and for getting into the groove of playing. The blues moves into the soul of 'Take Me To The River' in Eva Cassidy's version. If you like Eva's singing wait till you hear our Karen. This is her song all the way in the highs and lows. It just feels so good playing this song. The only one we had played live before actually. (This was our fourth gig and first in this line up. Number five is in the pipeline.) 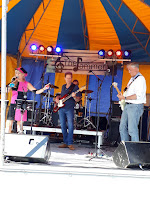 'Black Magic Woman' is played for some years, but somehow never felt right, until one of us saw a clip of the Mick Fleetwood Band. After that it all fell into place. The beginning is just fun to do. Unfortunately the mix totally fell apart and the mikes were switched off. It all came back together in the second verse. Yes, this was my first big solo and all the sound disappeared from the monitors on stage. I saw Peter enjoying himself behind his keyboard during his first ever performance. Speaking about being ready for a show. We got back into the groove of the song and picked up the middle part where we change everything effortlessly.

'Long Train Running' was another song that never came together somehow. The singing nor the rhythm, we never really got it right and kicked off the playlist. It was revived for a retry recently and see. We got this song swinging alright, just like it has to be. 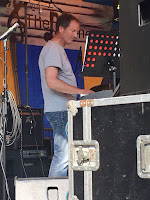 Then it was time for our biggest adventure, musically. Karen got out her little plastic bowl, pointed to the clear blue sky and said: "Believe it or not but it is raining" and starting ticking on it with her fingernails, while I started to make windlike noises in the microphone. I could see people watching in anticipation: what is happening here? When the rhythm section kicked in followed directly by the keyboard I could hear people cheering. That was a new experience, people actually welcoming a song. For a second I had the impression someone had put on the record. It sounded so real. Peter played as if he had never done anything else in his life. The song: 'Riders On The Storm'. If someone had told me I would ever play that song I would have said "sure". I would have shrugged and walked away.

One of the great hit bands in The Netherlands in the late 60s and early 70s was Shocking Blue. Of course its most famous song is 'Venus'. We play a lesser known song, but in my opinion a lot better. 'Send Me A Postcard' has so many interesting turns in the song. Challenging breaks that we nearly gave up on. And the band had a female singer, like we have. 'Send Me A Postcard' is like a brick wall. If one band member is not on the beat it all falls apart. And we didn't. I stood there having a great time playing it, hearing it come together. Playing the solo spotless. Hearing and feeling the bass in unison with me during the main riff. Feeling the breaks come together. Great fun. 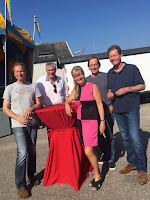 It all ended with Elvis. It was time to show our rock and roll side. 'Jailhouse Rock' is one of those songs that is fun to play. That was it, except there was a large demand to do some more. Peter was already standing on stage to thank us, but decided that popular demand won out this time. Some more rock and roll with our grand finale 'Johnny Be Goode'.

Sweetwood is not a good band in the technical sense, but we are good enough. And we have this small but huge force standing in front of us. A singer that doesn't hide herself and goes all out when the song gives her half a chance. "She's far too good for you guys", as a good friend said after the show. That may be true, but "We Are Sweetwood".