Ghost Stories. I Am A Rocketship 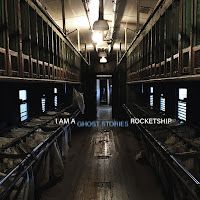 I am a Rocketship. At least it sounds somewhat more modest than "I'm your supersonic rocketship". Ray Davies and his the Kinks certainly trumps this band from Atlanta, partly via Sweden in that sense. Musically the two are wide apart, so let's leave the size and speed of the rocketships aside.

Ghost Stories is an album where rock merges with more subtler forms of music. This includes some forms of folk that lay somewhere below the at times fierce drumming and guitar playing. A distorted guitar does not necessarily need to be avoided. The same goes for the singing. This fits rock as well as folk.

I am a Rocketship is a duo based in Atalanta. Singer L E Kippner and partner in crime Eric Weissinger. He was a side kick for many bands over the years until meeting Kippner. This is the duo's third album, that was intended to as an EP. The songs simply kept poring out after the title song was written on Weissinger's "new" 1949 Gibson guitar.

The result is an album that has a few faces. Soft pop songs are alternated with songs with complex rhythms moving towards the hard rock segment of music. It makes Ghost Stories a divers album that distinctly grows when played louder. This is not an album to play softly. For that the drumming, bass and guitars are too demanding. It is Kippner's voice that remains subtle. The interesting mix Ghost Stories offers. I will not go as far that she could replace Karen Carpenter should her brother Richard decide to return to the stage, but it is not extremely wide of the mark. Let's face it, 'Crush' could be an Abba song with only very minor changes, i.e. the drums would be toned down (considerably). It is a perfect pop song that is easy to sing along to. (It even has "Take a chance" in the lyrics.)

This is set off against the opening song 'False Impressions' and 'Come Along'. Quite a difference. Another facet that shines through when playing the album somewhat louder, is how clear the sound is and how well all the individual instruments can be heard. The drums have an important part in the mix. They come through in a very clear way. On top of it all is L E Kippner's voice. Literally mixed up front. She has to be as she never exerts her voice. Scandinavian cool all the way. When she goes under in 'Give', it is only because it is one of the best songs on the album. More likely she gives away to the current to come up a victor later. Hence she lets Weissinger sing in 'Walk With Me'.

Ghost Stories as a whole presents rock. The band kicks in the distortion pedals as soon as it can. What it doesn't forget along the way is to infuse its music with a pop melody and most songs when all is said and done can be played with an acoustic guitar, allowing for a folk element somewhere deep down in the songs. Rock is the word though that comes to mind first. The dark kind. The fun kind.

You can listen to and buy Ghost Stories here: