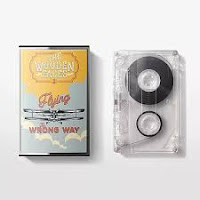 It may well be that youngsters these days do not recognise what is in this picture. This medium was unsafe for the little fingers of toddlers I can tell you. How my toddler son managed to destroy two of the unreplaceable tapes from between all the hundreds of other tapes he could have chosen, remains a mystery, but after I explained what they were for, it was over. Just like his book tearing days were over when I explained that I would not be able to read those book to him.

So here's 2020 and the band The Wooden Faces releases its first record on a cassette tape. The second tape release finding its way to me after the maxi single of A Fugitive some years ago. Where the music is concerned the music could not be more different though.

The story on the tape is a bit more complex. It is a sort of experiment. The music was recorded simultaneous analogue and digital. The former was recorded on tape but is released on tape as well. The latter as a digital download and recorded digitally. This allows for hearing the difference, is the concept behind it. Buy the cassette and get the download for free is the idea. I only have a digital version, so cannot compare. Yes, there is a tapedeck somewhere in the house, but since the one in the car died years ago, I have not played a single tape since.

The Wooden Faces work from an Americana singer-songwriter idiom. The basis of this music is American, but not without allowing some pop as well as some darker elements into the songs, hiding the underlying singer-songwriter capabilities quite adequately at times. The result is an eclectic mix, just like a record made by musical friends from different backgrounds and bands should sound like. 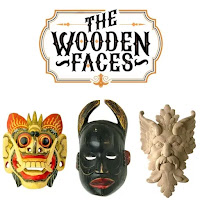 Dan Donnelly is the singer, Gouven Hamel the guitarist and Anth Mills the drummer. With a background in The Levellers, The Wonder Stuff and Celtic Social Club the musical direction gives itself a little bit away. It is also a direction to which this blog is no stranger. Several records have been presented on these pages. For Dan Donnelly it's the third time, in just as many musical guises.

I will not go so far and state Flying The Wrong Way is an outstanding album. For that most songs sound to familiar. They all have ties to things that have gone on before and sometimes better. Once we pass this remark, there is more than enough to enjoy on the album. The three musicians obviously were inspired. Hamel, who lives in France, flew to the U.K. and recorded all his parts in 24 hours and left for home again. In a way this can be seen as symbolic for Brexit, just like the first song obviously is an enthusiastic outing, with REM/The Byrds like chiming guitars, where the album ends with a small, bit glum song.

The music on Flying The Wrong Way moves between these extremes and in the most pleasant of ways. There are true songs on the album and The Wooden Faces manage to bring out a pop element in most songs, making them so easy to listen to. What I hear is 60s jangly pop with Britpop singing and that U.S. component. It gives huge chunks of Flying The Wrong Way a bite and something to chew on as well. Through the album's diversity and nice details, it is also the kind of album that tends to grow over time. Nice little details to (re)discover. For what seems to be a special project between the three musicians, a lot of love and care was put into it.

Flying the wrong way, eh? My advice would be to not fool yourself, The Wooden Faces, and keep a steady course. It seems like you're going the exactly right way to me.

You can buy Flying The Wrong Way here: