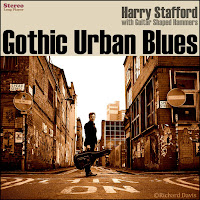 Gothic. Urban. Blues. The title of Harry Stafford's album holds three messages and I do not find many traces of any of them on the album. Unless we see gothic as dark, like in Batman movies and series, then there are hints to be found. This certainly is not country music and if I call a song like 'Minnie The Moocher' blues, which I think it is not, then perhaps we have found traces of all three words in the music on Gothic Urban Blues.

Harry Stafford presents songs on the darker side of the singer-songwriter segment with traces of alternative rock and even psychedelia. Think The Tragically Hip but more diverse in style.

Harry Stafford is a new name for me, but not to perhaps even many others. Since the early 80s he was a member of the postpunk band Inca Babies, before in 2015 starting out on his own, releasing the album 'Guitar Shaped Hammer' in 2017. This album is his second solo outing.

Let's get back to the title, as that in my opinion is the key to the album in a few ways. Large parts of Gothic Urban Blues has a dark and brooding mood. Stafford's ageing and well-worn voice contributes no little to this impression. So in a way I can call this big city blues, without necessarily having to be stuck in the traditional 12 bar electric Chicago blues. Muddy Waters is my thing here. Harry Stafford moves beyond all this.

In the opening song and single 'She Just blew Me Away' this dark alley late at night 'Nighthawks at the Diner' kind of mood is accentuated by a lone trumpet that is mixed into the whole as if a lone trumpeter is blowing blue, muted notes from his opened window on a dark night, escaping from a big city brownstone, hot, humid room without cooling in some form or other. The whole is extremely attractive to listen to. Kevin Davy plays an interesting part in 'She Blew Me Away' and on other parts of the album.

The first song also sets a sort of standard for the rest of the album. Some songs try to escape this mood. Like the chorus of the title song and the lead guitar part playing nice, dry sounding note patterns during the whole song. The trumpet returns as well for a small solo, again reminding me of the role the instrument played in the hits of Fine Young Cannibals in the mid-80s. The music as such does not, so not to be misled here.

It is the vibe of Gothic Urban Blues that packs me in when all is said and done. Harry Stafford manages to grab me and drag me into his album, past dirty gutters and back alleys, half crumbling balconies where his love and past loves are standing endangering their lives by just standing there. The song that made me truly realise that I was caught, is 'Infinite Dust'. Nothing much seems to happen when listening with half an ear. The subtleties come with the intensity of listening. The piano, the trumpet, the double tracked vocals, a softly touched cymbal. It is enough. The way The Boomtown Rats could reach me, only in its very, very best songs. Harry Stafford breached that gap easily.

Through the piano Gothic Urban Blues is provided with a higher standing. 'Black Rain' even has a trace of pop. Something Stafford's voice makes impossible to reach for. The darkness of the lyrics and voice contrast so nicely with the melody and instrumentation. Another modest highlight of the album. With 'Sideways Shuffle' Fine Young Cannibals finely enter the album anyway. The song is far emptier than the other songs, giving the trumpet a more prominent place in the whole.

'Disappearing' is another great song on the album. An empty song, more atmospheric, but with a beautiful vocal melody. There's this 60s, The Kinks vibe that is undercut by the atmospheric loneliness of the whole. The end is unmistakeably jazzy. 'Into The Storm' is driven forward by a piano and the lonely, lonely trumpet of Davy.

Harry Stafford has made a good album. One I can put on and enjoy immediately. On the outset it may sound like an elementary album, it is far from. The details provided show how much work went into the creation of the whole, making the album great fun.

You can listen to Urban Gothic Blues here: