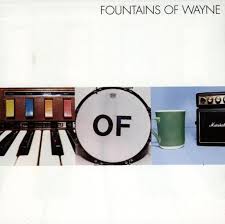 It is with quite a heavy heart that I am starting to write. Not because I have lost somebody physically, personally close to me. It is because I lost someone who has touched me deeply musically. Adam Schlesinger was one of the members of U.S. pop group Fountains of Wayne. With the eponymous debut album they really and truly touched me. Although that it is years ago I played the album, who knows it may even be a little disappointing 25 years later, most of the songs play around in my head regularly without any prompting.

'Fountains Of Wayne' was released in 1996 and had an immediate impact on me. The album rocked, soothed, cradled and partied all in one. The band played exuberantly but also nailed down resignedness and melancholy in a perfect way, but always with glimmers of hope. Despite all albums, except for the last one, have there (extremely good) moments, they never impacted me like 'Fountains Of Wayne' did. Probably because such an impact is simply impossible. Every next album comes with expectations and a back log of impressions.

I would have seen the band live twice were it not that the first time I travelled to the, then, Nighttown venue in Rotterdam, ticket in hand to arrive there at the booth being looked at by a puzzled person saying we have no show tonight and no, we have never booked this band. In fact, we found out that they are not even in the country. I was not the only person showing up that evening, but this was extremely mysterious as the ticket was sold to me through an official vendor, in the pre-Ticketmaster online sales. Most likely the exchange bank at the train station. Somebody had put the tickets for sale and announced the shows through the official channels.

The second time was after the 2003 'Welcome Interstate Managers' album, in Melkweg, Amsterdam in March of 2004. It was a great experience to hear all these great songs live. 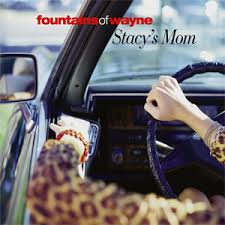 To be honest, I haven't a clue which songs are Chris Collingwood's and which one Adam Schlesinger wrote. Probably who sings could be a clue. I do not really care, to be honest again. Together with Jody Porter and Bryan Young, who I also saw playing with The Posies, they created a bunch of great songs as a band. Songs that deserved to be heard for eternity and not just 'Stacey's Mom' because of its naughty video. Just like they did not deserve to be killed because of the equally loose video of 'Mexican Wine'. Sex is totally different from having a girl drink a glass of wine. The video does put Fountains of Wayne on the same footing as Golden Earring, another band whose career was killed in the U.S. because of a video, for 'When The Lady Smiles'.

Fountains of Wayne ought to be remembered for songs like 'Survival Car', 'Radiation Vibe', 'Leave The Biker' and Sick Day'. Songs so diverse and each so good. And yes, then add 'Stacey's Mom'. Not before. THE song however, is 'Maureen', the single of the compilation of b-sides and whatever leftovers album 'Out-Of-State Plates'. The stuttering, ultimate powerpop song is the crown to Fountains of Wayne's attire. It's a mystery to me how this could ever have been a leftover, unless deliberately written for the album.

Adam Schlesinger died in a pandemic after having been hospitalised two weeks before. The respiration unfortunately did not aid him enough to recover. Corona, as we call it, or Covid takes indiscriminately, like deceases tend to do. Here it is someone who is on the young side of statistics. It is with a sad heart I'm writing this. Also because if only political leaders of the two most important countries on earth had acted sooner and more decisively on the looming crisis, it perhaps could have been avoided. If only they had thought of their people first instead of their personal cult, myths and popularity.... For once I let some politics enter a post, as it is a story that needs repeating, when incompetence stares the world in the face.

Adam Schlesinger leaves behind two daughters and a whole set of wonderful songs and deserves to be remembered because of them.

Next to his band career he has composed lots of other successful songs I was totally oblivious of. That leaves a legacy to be discovered. Play his songs folks, get acquainted if you like great pop songs. Fountains of Wayne has them in abundance

In the meantime I have played 'Fountains Of Wayne' once again. Sang along from a to just about z while sunrays entered my glum home, as outside there was not a sun in sight. Just dark clouds. It is ultimate good time music. The album has not aged a second. It sounds fresh, vibrant and so incredibly alive. There are not many albums that have aged so well. 'Utopia Parkway' is up next.