When I Wake Up. Maverick Sabre 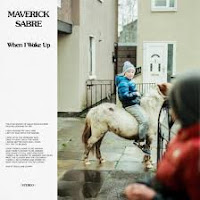 There's something strange going on here. It is as if I have seen the picture on the cover before, although I strongly doubt it to be true. There's more strange things going on here. When I Wake Up is not an album that ends up on my good side in general, yet I am writing. And now I'm at it, the third strange thing is that I like the album distinctly better when listening on the stereo than with earphones in.

Maverick Sabre or Michael Stafford as his family knows him, grew up in Wexford in Ireland before re-migrating back to the U.K. where he was born. When I Wake Up is his third album.

The basis of this album is soulful beats. There is a hint at hip hop and rap that is overlain with soul, a basic form of gospel and jazz. It makes When I Wake Up pleasant to listen to, where usually I will have turned an album like this off fast. In part this is prevented by the voice of Sabre. It has a very nice edge to it. The other part is the way the soft beats are incorporated into the songs and melodies. Listen to a song like 'Don't Talk About It'. An electric guitar plays a small, simple but oh so effective riff over and over. The female choir singing the title adds a soft, floating touch in the way it is recorded and mixed into the song.

The first reference coming to mind is G. Love and Special Sauce's first record. I haven't heard it for circa 24 years, so it may be total rubbish to write so, but it does. It is the mood brought on by the drums I would say. There are a few more modern ones. Because of the female voice in 'Slow Down' Amy Winehouse joins the references. I never listened to her beyond a single song on the radio though. Finally I hear some Seal like in his first hit songs.

When I Wake Up presents a mix that goes down fairly well with me and yes, it is a surprise. The album mixes a few atmospheres really well. It is not a happy sounding album, yet it brings me ease and faint smiles on my face regularly. A rare combination, like I wrote: with When I Wake Up something strange is going on.