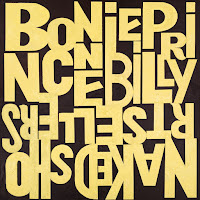 Despite the fact that Bonnie 'Prince' Billy has featured more in the former magazine than on this blog, he does not need much of an introduction. Those following this blog have encountered This Leo Sunrise a few times in the past two years.

Leo Meijer, This Leo Sunrise's bass player, is a long time acquaintance of Will Oldham and manages a near official website/fansite on all things Will Oldham. After all those years of friendship they have decided to release a split single on the Tiny Room Records label from the Netherlands. In a bio on This Leo Sunrise one of the first things mentioned is "influenced by", fill in any incarnation of, Will Oldham. So it is not hard to imagine that a cooperation by the two artists is quite understandable. A Utrecht "supergroup" was created by Daniel Papen, voice, Leo Meijer, bass, Jacco van Elst, guitar and Gerben Houwer, drums and called itself Naked Shortsellers. So much for the connection and origins of this split single.

Both present a song very much worth while listening to. Bonnie 'Prince' Billy's is a familiar sounding song. Stripped to the bone, the acoustic guitar drives it relentlessly forward with its elementary sounding guitar pattern, played over and over. At least two "princes" sing to us. A few sparse piano notes come to us in the form of a "solo". Very slowly, not to mention delicately, the song is flashed out. Bit by bit more voices join and an extremely estranging sound, making the song eerie. Only to drop away to once again leave us with just a guitar and voices of Bonnie 'Prince' Billy. The song is on family ties and binding to children (don't) or brothers (do), friends (only when they see the best in you), friends of friends (when you trust them). So a piece of advice is given as well.

Harbour men starts with a voice emulating Johnny Cash's bariton. My take is that Papen sings in a deeper voice than he is used to. During the first notes I hold on to my heart tightly, yet when the song plays itself out, all concerns are set aside. This is a fantastic song, slowly moving, gently pushing forward. Papen and Will Oldham together sing lead parts, where Papen bit by bit creates a Nick Cave atmosphere over a more widely arranged Bonnie 'Prince' Billy kind of song. The country flavoured Harbour Men knows a subtle pedal steel solo lifting the melancholy mood of the song to an even higher level. This is beauty of the spinetingling sort, folks. The best of.

The way Naked Shortsellers slowly changes the mood in Harbour Men is so well done. Step by step the song becomes more direct and from distant ever closer. By changing the vocal melody Daniel Papen is in front of my face ever more. "I thought I knew you", he sings accusingly. Will Oldham takes over in the background before Papen returns for a perfect ending.

After 'Gloria' with broeder Dieleman Bonnie 'Prince' Billy releases another split single in The Netherlands. It may even be a better one.

You can order the single here: