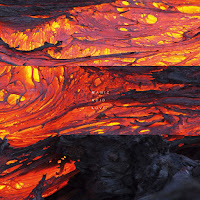 Another one of those records that should have been reported on in these pages some while ago, but somehow never got off that pool of potential reviews. The reason is not that strange. Manic Acid Love is not my every day record. Schmieds Puls not an average name either. So what are we dealing with here?

Following Anaana by Cari Cari, Manic Acid Love is the second album by an Austrian band making it to these pages. With this album the band releases its third album, my personal first. With singer Mira Lu Kovacs the band has a charismatic front lady, who is not afraid to confront her listeners. Musically Schmieds Puls can be extremely direct as well, but doesn't stop at obvious effects. It wants to affect its listeners and engage them through different approaches towards a song.

Together with bass player Walter Singer and drummer Christian Grobauer Kovacs presents a musical hybrid that pulls elements from pop, e.g. The Cranberries, but also from alternative pop, jazz and experimental music more built on sounds than clear cut songs. The result is a fascinating aural experience. One that doesn't let itself be caught easily. For that Manic Acid Love is to diverse. Hence the reason it took me a while to really dig into the album. Over this all Mira Lu Kovacs sings with her light voice, not seldom in complex harmonies with herself. From light-hearted acoustics arpeggios the mood can grow dark within an instant with heavily played distorted electric chords and return. It makes for fascinating listening.

Not that what I'm hearing has never been done before. Listen closely and everyone will deduce an influence here and there. In the way of singing and the music. Schmieds Puls really works with its influences to make them its own. E.g., in a jazzy outing a Michael Jackson like rhythm can emerge in an outro. A classical style intro on an acoustic guitar can be followed up like nothing of the kind came before, changing the song into a folk led playing of the guitar.

It is in this way the Austrian band keeps putting me on the wrong foot. One moment more successful than the other, but never without surprising me with its next move. This is not an album to put on at a party, but everyone who enjoys listening to a serious album with music very much worthwhile listening to, should give Manic Acid Love a chance. Follow the music and follow the story from manic to acid to the vindication of love.