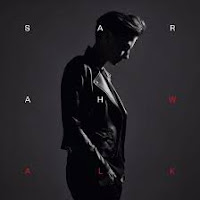 A while back I received an email saying perhaps this is something for the blog as I can't do anything with it where my radio show is concerned. Listening to Little Black Book for just a few seconds I understood .No's email completely. At the same time I knew that it would fit on the blog. It remained in that vague sort of musical limbo. Ever since the summer I was running behind on releases and this one had already been released earlier even.

Enter Christmas time and a time to look over my shoulder to see if there are albums left behind that deserve a spot in the final days of the year.

"I've got a little black book with my poems in", sang Roger Waters on the "The Wall" album in 1979. Well, does this lady have a little black book with her notes in! The title song opens the album with a piano. Fiercely played, hurriedly even as if she can't wait till she's able to deliver her message. Guitars and drums enter. All an intro to a grungy chorus, where Sarah Walk shows the world the ease with which she sings in this genre. The part that seems an intro to the chorus is so strong and then it turns out to be a part of it anyway. Relation problems centre in the lyrics. "A heart breaking at the seams", words that are said to be so true but perceived as lies on the receiving end. 'Little Black Book' is a strong song, where Sarah Walk and musicians explore the boundaries of the composition as well.

Sarah Walk was born in Chicago and graduated from the Berklee College of Music. Together with producer Steve Brown she set out to record her first album, released this October. Her piano is a foremost instrument on the album. Together they opted for a big sound. Even the first ballad on the album, 'Maybe Someday' is huge. Walk's voice is a powerhouse even when holding back. The piano is played like a hammer, keeping time like a bassdrum.

On a day when a listener is tired, this is not the album to play. (Well, certainly not the first half.) Everything is big, huge, blown up, so you'll be wound up instead of winding down. In the lyrics relationships fail without exception. Someone is leaving, someone is holding on while the other is letting go or has already left, leaving the other behind in doubt and sorrow. Sadness is the parole in Earth's valley of tears of Sarah Walk, where anger and bafflement fight for supremacy.

Not putting this album on ever would be a serious mistake though, as Little Black Book has its extremely good moments. Even moments were Sarah Walk leaves her rocking pose behind and returns as a night club singer. 'Time' is a very delicate song, kept small, where Ms. Walk shows a totally different side of herself. Tender violins set in to underscore the pain felt because of another break up.

Playing a piano there's always a danger names of the likes of Elton John and Billy Joel pop up in a review. I could understand if they do. Especially Billy Joel, the piano parts at times do remind me of him. That is where things stop as far as I'm concerned. The rock side of Sarah Walk is far more authentic, even when violins join again in 'Can't Slow Down' the rock is sounding great. Not like the pastiche Joel would create. The guitars are an integral part of this song that rocks hard for a piano driven song. If I have to compare in NL, it will have to be Anouk of her first several albums. Her fans can certainly check Sarah Walk out.

Little Black Book shows several sides of Sarah Walk, maybe even one too many, but so be it. With Little Black Book she lays down a very impressive introduction to herself and the start of her career. With a voice like this and the varied songs she's able to write and arrange this album ought not to be the last I hear from her. It may be a few years from now, but I'm already looking forward to the second helping.

And the androgyny everyone else writes about? Whatever she is or wants to be, I just hope for Ms. Walk she'll be happy. Certainly happier than when writing Little Black Book. The music brings me joy, so a warm thank you for that.

You can listen to and buy Little Black Book here: