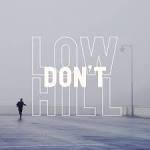 It's been quiet for a while on the I Have A Tiger Records front. That ended with this song. The first release by a band called Low Hill.

Low Hill is a band round Laurens Vanhulle and based in Antwerp, who gathered some musicians around himself for a new musical project. The band name is as appropriately modest as it is right for the lowlands Antwerp is situated in. Low Hill may sound modest, the music is far from once the song develops itself towards its climatic ending.

In a way the same bells go off as when I listened to 'Love When You Don't Want It' by The LVE for the first time in 2014. I'm not as short of breath as I was then, but the effect the song has on me is similar. It touches me on a deeper level. Now both bands have the same producer, Joes Brands, so that may explain some of it, but certainly not all.

'Don't' starts with a faint rhythm far off in the mix. It could have been there by mistake or coincidence. It seems so distant, so not part of the intro and atmospheric first verse and chorus. There's so much room for the singer to move around in.

It is in the second verse when a muted, rhythm guitar joins and a female voice lifting mood and song up some more. A lead guitar joins as well, there's drums. Slowly electronics emerge and psychedelic treatments of the voices make my head spin around and around. The lead guitar takes the song over and starts playing a beautiful solo. Reminding me again of the way The LVE's hit song plays itself out. Don't is able to capture me in the exact same way. The difference is in the melancholy undertone where The LVE convinced me more. That takes nothing away from Low Hill's song that is a beautiful song all by itself.

Don't is the first song to be released by Low Hill. A first glimpse of what the band is about to unleash into the world. Vanhulle has worked for two years with his companions, Emiel Rymemans, Anke Verslype, Jordan Hudson and Marlon Leue to create music on the edge of classical songwriting, electronics and neo-soul, as the band describes its music. Add to that a lot of atmospherics and playing with the mood of the listener and the combination is intriguing to want to hear more in the future.

I can't tell the future but I understand that an album is under way. Too bad that it may still be some time off.

You can listen to Don't here:

You can buy Don't here: