Under The Pines. Bardo Pond 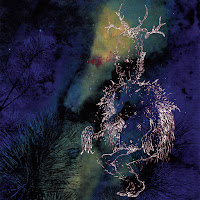 Bardo Pond is a band that started in the U.S. in 1991. Released its first EP and album in 1995. Under The Pines is the band's 11 studio album. Not counting, compilations, EPs, jam recordings and numerous side projects of the five members.

There's not much that prepared me for this album. Simply because I do not have any. The closest that comes to mind is Esben and the Witch, a band I saw in Leiden a few years back. The music is as mysterious as the album cover is. Yes, in a way it is art. At the same time it is strange, overwhelming, ever present. The voice of singer Isobel Stollenberger is a mixture of a fairy and a witch. Double tracked a lot of the time. The voice floats, hovers, like a ghost or a paranormal experience, over the music. Strangely enough her voice or better voices is all that seems to keep a song like 'Out Of Reach' together. The only sane element in an onslaught of the senses. The lead guitar is out of control for most of the song. The rhythm guitar or what is supposed to be one goes all out as well. The drums pound away. Certainly it's a rhythm not one that necessarily keeps a song together. The bass is underneath that all somewhere doing something, who knows what. It is Stollenberger who is floating around as the sanest member of Bardo Pond, but only by comparison. Just listen to her doubletracked vocal lines. The song takes forever, over 10 minutes long.

Now it's fair game to ask, but why are you listening? Simply because I'm intrigued. Trying to find out what is going on here, with a positive attitude. It doesn't work in all tracks. 'My Eyes Out' is too monotonous for me. It just goes on and on. Gazing at their shoes, but I need a song in there. Like there is in the opening song, 'Crossover' and 'Out Of Reach'. Just a repetition of chords, endlessly the same is not enough, no matter how noisy the solo is, how loud the drones in the back are, I'm not engaged, just shaken, loudly, violently.

When the noise dies out in 'Moment To Moment' and a bluesy acoustic slide guitar comes in over the dark undergrowth, it is like the doors are thrown open and fresh air is let in. It's still night out there, but there may be the hint of moon and stars. The slide guitar at times sounds like two swords sliding off one another. A hint of danger never leaves Under The Pines. The fact that Bardo Pond allows for some variation in the aural sludge it drags itself through scores a point with me. When a flute enters the mix, a 60s psychedelic element enters the music. Making it breathe even more. The inner dynamics of the song lets it grow and grow into something larger, but that is o.k. Some restraint is shown making the album come alive.

The same goes for the title song. Stollenberger even moves off into Stevie Nicks territory, speaking of witches. Which is a surprise. 'Under The Pines' is the song that deserves that title most. The brothers Gibbons, John and Michael may still be fuzzing their guitars far and wide. With its six minutes the song is a bit too long. I can't lay away the idea that with a little more effort 'Under The Pines' could have been great, not just good. Repetition can bring one in a trance, but when that doesn't happen what remains is repetition.

The final song is 'Effigy'. It starts out so great. The lead guitar just growls every so much bars. Stollenberger's flute, mixed somewhat in the background, leads the way. As if keeping the animal locked up in the guitar's amplifier enthralled with its movement and sound. The sanity in the madness. Slowly but surely the whole band takes over more and more. The flute stages a losing battle, surrounded, slowly sinking beneath the maddening crowd, about to be trampled, but seems not to be afraid of what is bound to happen. It keeps its calm and holds out, yet barely.

Under The Pines is not my average day album. Yet I have played it a few times and am surprised that it touches me. Albeit in different ways on different days, touch me it does.

You can listen to 'Effigy' here:

or listen and buy the album here: