A Pink Sunset For No One. Noveller 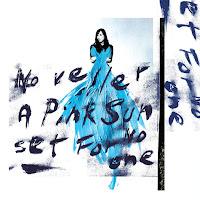 Those who follow this blog regularly will have noticed that instrumental albums are not something to be found easily on these pages. There may be the odd one, but I couldn't call one to mind. So something exceptional happens today: the review of an instrumental.

Is there a reason for having no instrumental albums on this blog? No perse. First, I just don't encounter many. Second, I love to sing along. Third, I may lose interest if the melodies are not strong enough. That is just less likely when singing is involved, but certainly happens also.

A Pink Sunset For No One is the new album of guitarist Sarah Lipstate, an artist with a long list of collaborations, film scores and involvement in alternative music circles. Listening to this album, also perhaps the last person I would have imagined Iggy Pop to have invited to tour with him across the world on his latest tour. Noveller has that to its name. I can only wonder how the audiences responded to her, anticipating Iggy (and Josh and Matt). Having not seen Iggy on this tour, is probably a great shame.

The best way to describe the music is that the compositions are worked out soundscapes. I wonder whether they fit the Kairos, .No's radio show on Concertzender, format. They may, but also could be just outside. Let's see if he picks up this hint.

Having written this, I notice that it is extremely difficult for me to write something sensible about the music beyond mentioning the dreamy quality of the music. Let me try anyway and see where it leads me. Headphone on, here we go.

If this were a movie score, the opening song, 'Deep Shelter', would be played underneath a wide screenshot, showing rugged nature. From up close to the furthest distance, with high, uninviting mountainranges in full view, far away. Water is involved. The loop is the meandering part, the lead guitar is where the water is pumped through narrower parts. The zoom in on people traversing the landscape on their way to an unknown adventure. Crossing rivers and mountains with all the dangers that are involved. The music is not happy, but anticipating, so a beginning not an end.

The music involves layers of guitars with here and there a percussive sound or a keyboard. Noveller manages to offset different guitar parts that harmonically work but also bounce off each other. Listening more closely I notice that the album is not 100% instrumental. There is a "hey" vocal coming by in 'Rituals', in an Enya kind of way. It's a vocal, not singing. More an accent laid over the melody.

My first instrumental album was, I believe, 'Tubular Bells' by Mike Oldfield. If it isn't it was 'Ommadawn' by the same artist, but then I already knew the former album intimately. Next up was 'In Search Of Ancient Gods' by a band called Absolute Elsewhere. The approach of both albums can be found on A Pink Sunset For No One. Where 'Tubular Bells' was a whole in the composition, so more classical in its intent, Noveller's album is a collection of compositions. Where the similarity starts is in the sound of the guitar. Lipstate's overdrive is uncannily like Oldfield's rudimentary distortion of the early 70s, as is the, for lack of a better word, wobbly sound in a few of her compositions. Listen to 'Trails and Trials to find out more. Somehow in combination with the 'The Persuaders' theme song. The dreamy quality of the music of Absolute Elsewehere is the other connotation that I have. "The spaceship sounds" simply come to mind in 'Another Dark Hour', e.g.. The main difference with both examples is that A Pink Sunset For No One does not come to a climax. It goes about its way, without urgency, but with inner tensions playing themselves out. There you have my explanation why I remain here with my headset, listening, anticipating what's up next.

Does all this make a fan of instrumental music? No, but nonetheless this album is interesting to listen to. Sarah Lipstate has a near endless imagination and number of tools to make her guitar sound differently, next to finding melodies and sounds that, no matter how estranging they may sound, form a whole. It's simply interesting to learn what she comes up with next.