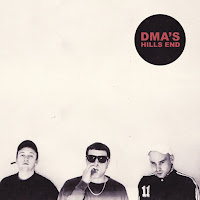 Yes, it took me a while to get around to DMA's debut album. At first I took the album for too much of something already there, e.g. Oasis, Arctic Monkeys, but I did get around to the quality that can be found on Hill's End. So let's delve a little deeper.

A trio from Sydney got Noel Gallegher to frown on it negatively, so something must be going on. Well, I liked Noel's last record to date. It even made my top 10 of 2015. That record does not offer the sort of excitement that Hills End holds in several songs. No, it does not start with Oasis' first song  on its first album. There is no 'Rock and Roll Star' in sight. 'Timeless' does create a level of expectancy which is quite high. It rocks, has that Liam sneer in the singing and a dose of rock by a band that sounds tremendously sure of itself.

Tommy O'Dell, Matt Mason and Johnny Took manage to set an atmosphere that makes it pleasant to descend in. When the band comes out with a ballad, 'Delete', it manages to turn it into an epic rock storm without losing what it aimed for: a tranquil moment in a testosterone explosion. In 'Too Soon' the band does even better. In a rock song with a soft pre chorus sequence the song takes off in a great chorus taking 'Too Soon' in a totally unexpected, different direction that in sound is very familiar, but non the same extremely good.

DMA's is not original at this starting point of its career, but is excused for now. The band compensates in all the right ways. The best of the Britpop years on the Oasis side of that spectrum are coupled with the energy of the early Arctic Monkeys which leads to a potent mix. The melodies are free flowing with some nice finds in the overdubbed guitar melodies. The singing is that strange combination of aggression and slacker. The presentation in your face. The record is mixed in a way to reach that effect. Singer Tommy O'Dell is right in front of me when I play the record. The band is right behind him as a wall of sound from which not a lot is allowed to escape from. Elementary with the desired effect.

Not every song is as good as the other on Hills End, but it has been a while since I heard an album as consistent in quality from a Britpop band. Noel Gallagher's High Flying Birds' last album was the exception underscoring the rule. I think Hurricane #1's debut and Supergrass' fourth album. 'Life On Other Planets'. And that is quite a long time ago. Hills End is welcome in other words.

That leaves me with one question. Why are there so many softer songs near the end of the album? It does give rise to ask who DMA's really are? A rock beast or a ballady band that is even not afraid to put a slight country element in its songs. The strong point of DMA's is when it rocks out. O'Dell's voice has the right sneer for it, so use it more is my advice.

All ends well with 'Play It Out', when the guitars are plugged in again. Play it loud, I'd say.

Overlooking it all, Hills End has some extremely exciting moments but also has some dips in energy, mainly because I think the "ballads" don't really fit Tommy O'Dell's voice. The energy in the rockers makes up for the dips in abundance. Hills End is a promising debut album but does not make up for all the clamour made in the past year about DMA's. Hills End is good, not exceptional.

You can listen to 'Delete' here: