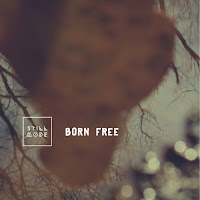 Stillmode released its first EP, Born Free. At first listening things sounded quite familiar. The sort of pop rock that is all over the radio in the past few years. Listening twice things start to draw attention to themselves and set Born Free apart, even if it is only a little.

Stillmode sounds like a band full of youngster. The youthful exuberance can clearly be heard on Born Free. The band is hurtling over the songs and their structures, while bouncing all over the rhythm. In short, this EP is infectious.

Reading the bio of Stillmode and looking at the picture on the band's webpage the youth part has to be adjusted a little. Youth is relative, but for someone active in rock since 2007, the inexperience part associated with youth is no longer appropriate. Singer and songwriter Pascal Molenaar was active in KinKobra and released a few records with that band before morphing into Stillmode.

On Born Free Stillmode plays the louder variety of radio friendly rock pop. Guitars play the first role in the form of rock riffs and loud chord strumming that has that melodic quality between strumming and a solo. Molenaar who is responsible for the songwriting states that he is influenced by 70s and 80s music. Apart from what that is, what I hear mostly is 00s bands like The Killers and Keane (with guitars) and some more modern bands of the 10s. Stillmode is not afraid of aiming at radio friendly overtures and is right to do so. Every band plays to be heard. A song like 'Home' deserves to be heard. There's a part where the melody goes down, where I expect it to go up, which is close to brilliant.

In the title song Stillmode surfs a dangerous line of getting too close to the traditional rock ballad of the 80s (so their you are with the influences?). And escapes falling of that cliff. For me the song captures the right mood and sound. The singing does not compromise towards that horrible 80s smoothness and neither does the band. The playing is full out where possible and the internal dynamics work.

The Killers come back in 'Outside Work'. Especially in the piano part that graces the chorus. As they do in other parts of the EP. When 'We belong' kicks in its chorus I realise why I am attracted to Born Free and why I am not so much attracted to that band I already mentioned twice in this post: Stillmode allows itself to sound open and positive. It doesn't hold back on showing the world how much fun it has in playing its songs. Everyone listening is allowed to enjoy that joy as well. When that door of realisation opened itself to me, I knew that another fine EP from a new Dutch band had entered my life.

Stillmode? A promising band is my conclusion.

You can listen to 'Crazy Like No Other' here:

or buy the EP on Bol.Com: