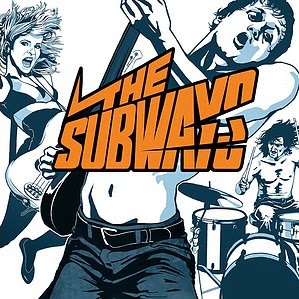 Somewhere in the previous decade there was this band from England that caught my attention and especially the opening song, 'I Want to Hear What You Have Got to Say', from the band's first album. After that The Subways and I parted ways. The follow up albums didn't agree with me in some way and I forgot all but about the band, except for that one song that every once in a while comes by on this old mix tape (yes, tape!) in the car. Strangely enough a few months ago I wondered whether The Subways had ever made a new album in the past five years or so. Coincidences don't exist, as I found out that there was a new album called The Subways. And yes, I like it.

At first and second listening that's not so strange. The Subways do a Blood Red Shoes on their new album. The Subways has pace, it rocks and presents all the right melodies within songs. Boy-girl vocals all over the place. The singing is much more a mixed affair than I remember from 2005. It gives the songs on The Subways the right kind of variety. On top of all this the band manages to play with the rhythm within the different songs. No matter how hard the band rocks out, like in 'Dirty Mighty Paws', loud riffing all over the place, a tempo shift clears the sky and opens up the song in a beautiful way. These sort of changes The Subways manages to weave through their music, making The Subways an impressive level of proficiency.

The Subways is Billy Lunn, guitar and vocals, Charlotte Cooper, bass and vocals and Josh Morgan, drums. The trio started out as a grunge cover band, but wound up as a Britpop, punkrock band. Loud with a lot of pleasant melodies, with a modest amount of anger infused into the songs. 'Young For eternity' was released in 2005. The Subways is the band's fourth album. It appears I haven't missed an album anyway.

The Subways is certainly the band's best album since its debut. Being a trio there's a lot of sound to fill. Josh Morgan is the kind of drummer to do just that. He is all over the place. His drumpatterns are not only busy, but inventive as well as varied. A lot is going on. There are not many records on which my attention is on drums as much as this one. Josh Morgan lays a foundation that is utterly fascinating. He not only sets the pace but also makes the mood tense or loose. A rare feat for a drummer.

Charlotte Cooper plays the Laura-Mary Carter role full of confidence and conviction. She even has the same intonation and all. The large difference is the number of snares on her guitar. Her background vocals and oohs and aahs makes The Subways grow close to the level that is reached on the album 'Blood Red Shoes'.

Billy Lunn, who is Josh's brother William Morgan, lets his guitars fill all that is left over. Large riffs, heavy sounding rhythms and lead playing in the placed where it's needed. Often more than one guitar is played, creating a layer of guitars that fill the sound.

Over this all the singing takes place. Lunn's voice seems too light for the music The Subways plays, but it really fits. Even in the darkest passages, where Lunn is more screaming than singing, like in 'Black Letter', he easily gets away with it. The harmonies top it all off, making The Subways and extremely pleasant album,  despite its heavy sound. Strangely enough the only song the band puts the brakes on, 'Because of You (Negative Love)', is the song that I have some difficulty with. Acoustic guitars and a piano, the song doesn't fit in it seems.

For me it's clear. Give me the volume, the guitars, the drumming, the singing. The whole way. The name Blood Red Shoes falls an awful lot in this review. That may be seen as something negative, but in this cases it most certainly is not. The Subways have made an album that is just good. There's nothing left to say.

You can listen to 'Taking All the Blame' here: