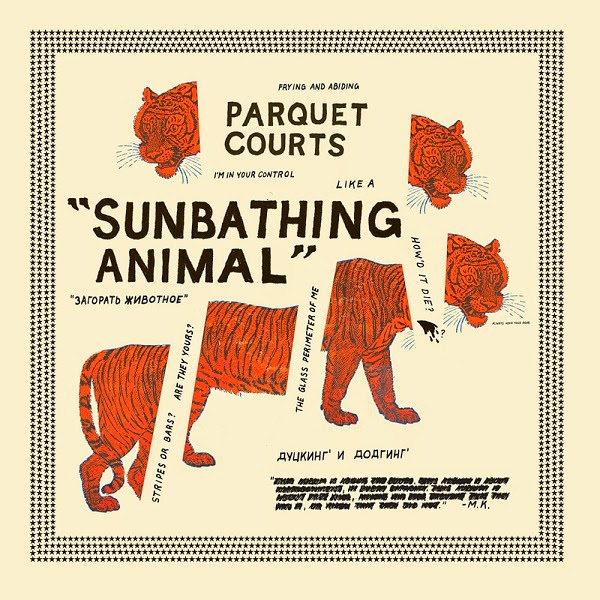 Last year Parquet Courts featured on this blog with it's debut album 'Liquid gold'. The album was quite okay, but did not totally convince me. A year later here's Sunbathing animal. Where does this album put Parquet Courts with me in 2014?

Quite well, actually. Sunbathing animal links Parquet Courts to a long line of New York City bands. From The Strokes all the way back to The Velvet Underground. The influences are quite apparent, without hurting the sound of Parquet Courts in any way. To the contrary. A piece of balled energy called 'Black and white' is the best the band has produced to date. Not that the whole album is that good (listen to the monotonous 'Vienna II' and you know what I mean), but Sunbathing animal is consistent and exiting.

This consistency starts with the sleeve. The sleeves of 'Liquid gold' and Sunbathing animal couldn't be more apart, but this one again is a show off of artiness and a thought about grabbing attention with, well, ugliness. There's not really another word for it. Both covers are not exactly bathing in beauty. The same goes for the music. Beauty is not the effect Parquet Courts is striving for. The music is, well, ugly. Sticky, prickly, at times almost irritating. Like a New York summer's day. The effect that Talking Heads had on its first albums, The Velvet Underground had in almost all songs, a band like Television became well known because off. Parquet Courts can show this same form of detachment in its songs. Like they're here and not. The emotionless drone of Andrew Savage's voice, like the desolate punkers of 1980. When the heyday of the movement was gone and but despondency was everywhere. Not to mention the feeling that the end of the world as we knew it was widely felt. On top of that are The Strokes, but Parquet Courts is so much more dirty. Underwear is worn for at least a week by these men, just like when that was still common practice not that many decades ago.

Let's suffice here to conclude that it is quite clear in which pond Parquet Courts has been fishing. The effect that all this has on Sunbathing animal is that the album sounds terrifically inspired. Bass and drums can pound relentlessly. The title song is sheer madness. A relentless pace. Going forward 'cause they can't find reverse. It is also sheer excitement. Sunbathing animal is like an itch one can't not scratch. Not all is this fast, luckily. 'Up all night' compensates instrumentally and lays a bridge to the ballad Parquet Courts style. 'Instant disassembly' calls up memories of The Clash. Andy Savage manages a nice Joe Strummer here.

That last remark brings to mind Belgian band I Drove a Tank, that released it self-titled album in April and also does a nice The Clash or two. The difference is again that Parquet Courts sounds like it means it. From opening song 'Bodies' the guitars clash with stiff rhythms, harsh riffs and strong lead melodies and some feedback to top things off. Again I come back to 'Black and white' in which all this comes together in the most perfect way (including some dirty handclaps). The band goes totally over the top in the solo part of 'Black and white', killing the madness all of a sudden, returning to the strong, hard rhythm. Things do not get much better on Sunbathing animal. While the contrast with the just as nice ballad 'Dear Ramona' is a giant one and just that is what makes Sunbathing animal not just a good album but a great one.

Parquet Courts surprised me with Sunbathing animal. 'Liquid gold' was nice, but not much more than that. Sunbathing animal is a giant step forward, showing tremendous growth in depth and pace. In other words, this is an album that deserves a large rock audience, from punk, to (garage) rock and the darker crevices of alternative rock with a dash of psychedelia. It's all here and in great form.

You can listen to 'Black and white' here.