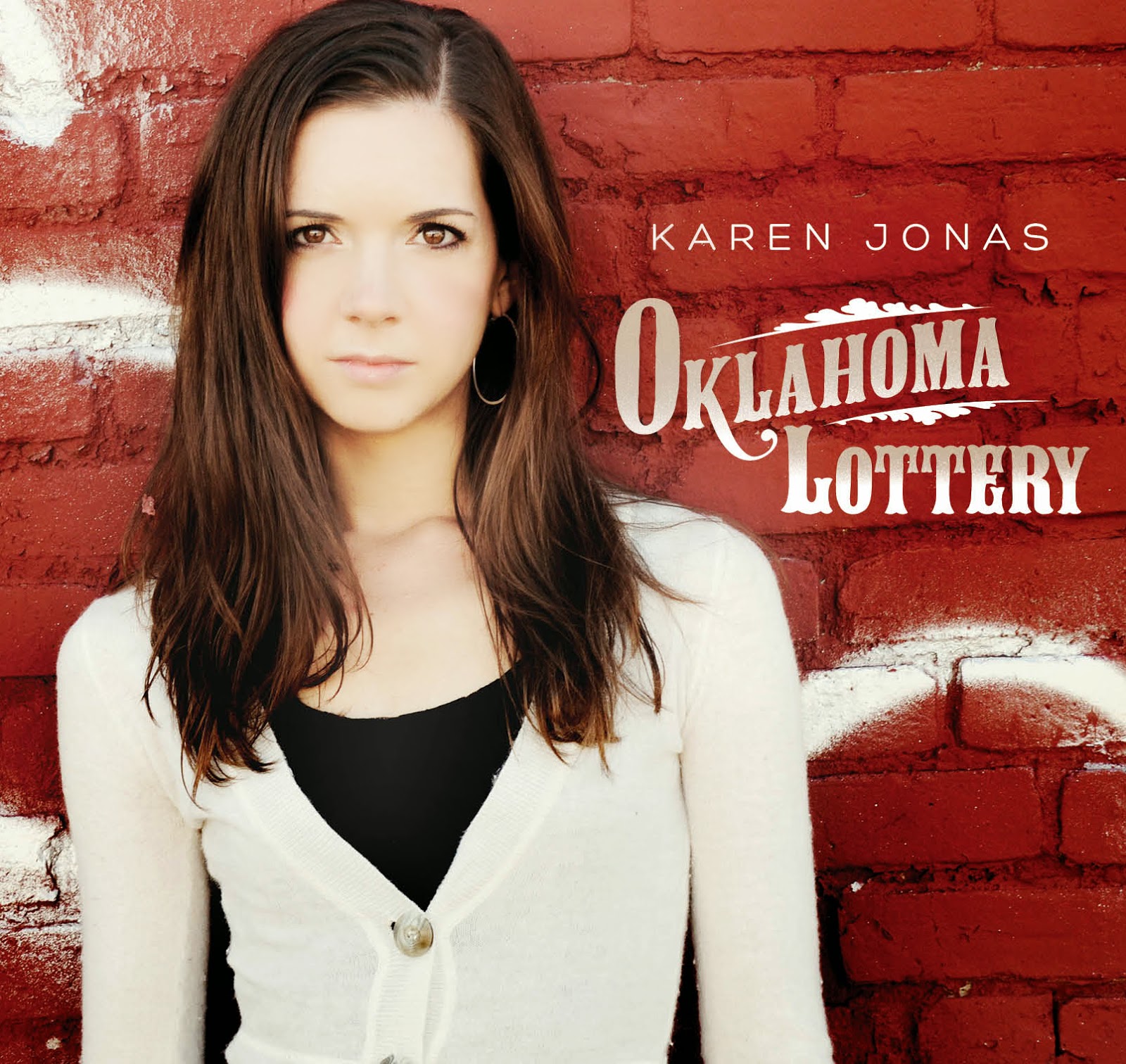 Erwin Zijleman beat me on this blog with his post on Karen Jonas' debut album, but as I like it so much I couldn't resist writing my own.

Karen Jonas featured in one of the very first posts of this blog as one half of the duo The Parlor Soldiers. Search and you will also find an interview with the duo and a review of Alex Culbreth's 2012 album 'Heart in a mason jar'. The duo is no more and in a way we are the better for it: two albums instead of one!

Oklahoma lottery is an album that can be filed in the country, folk and roots segment of music. That as such doesn't say much as there are albums in that segment that make the fillings jump spontaneously out of my teeth. Not so with Oklahoma lottery. Everything seems to fall into its right place on the album. The music, the laidback playing and Karen Jonas' voice that leads us straight to heaven. The title song is in my opinion the ultimate song on this album. The song holds on tight to the backseat of the backbeat. The mood is so mellow that there is a danger the musicians will fall off. Over the rhythm there are some lead notes on an electric piano and an electric guitar. And smack dab in the middle is Karen Jonas. Singing in a slow, deliberate way, as if it's late at night and still extremely warm and humid. She carries this song home and keeps it all together at the same time. 'Oklahoma lottery' is so good it deserves a statue.

The album starts with 'Suicide Sal', an up tempo song that rivals the opening song on 'The Parlor Soldiers', 'Shallow grave'. Personally I think 'Shallow grave' is one of the best songs ever in this genre and 'Suicide Sal' comes a good long way. 'Money' is a sort of mystery to me. The song starts as this Nashville imitation of a country rocker, in other words something I, close to, detest. What happens is that Karen Jonas gives the song these twists, that endear me to 'Money' without hesitation. The same with the ballad 'Thinking' of you again'. This country ballad grows into a beautiful song, because of some chord changes that make it different and stand out. And that voice of course. It turns out I'm turning into a great fan of Karen Jonas.

This frail looking young woman has a voice that has a tear in it without ever over-doing it, can sound sad and seductive at the same time and is powerful without forcing it at any time. Another word that shoots to mind is self-assured. She knows exactly what she's doing here. Her self-penned songs were lovingly recorded by Jeff Covert, who made Oklahoma lottery sound really great. Wide spaced, with room enough to hear each instrument separately and clear. The musicians supporting and playing with Karen Jonas have done a great job as each song gets the treatment it needs and deserves. They hold back in the ballads, lending heartfelt emotions to a song like 'Steppin' on your toes' and go full out in the up tempo ones.

I don't know whether I'll ever visit Fredericksburg in Virginia again, but it would amaze me if I would run into Karen Jonas there. She ought to be making it big elsewhere. Oklahoma lottery should be the first step in that direction. Roots music has a new star born, says

You can listen to and buy Oklahoma lottery on Karen Jonas' bandcamp site: