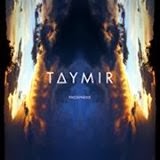 Every once in a while a song comes by that makes me prick up my ears straight away. It happened last Sunday in the car. The song the radio played made me go all gooey. The 'Aaa aaa' parts were utterly brilliant. The way the melody goes down instead of up in the middle, makes it even more special. One that Kaiser Chiefs could suck a point to, as we say in Holland. Something that needed checking out. A song also that wasn't announced and another song played after straight away. What is it? Tell me, DJ, please, please tell me now!! The song, that inspired me to write on 'The right side won' by What Fun! first, turned out to be by a band called Taymir from The Hague.

AAAH has everything that makes a hit. The combination of urgency, the possibility to sing along, more than easy lyrics where it counts, a great guitar hook and it's over before you realise it. In short an instant classic. Taymir did a great job in this song. The song starts with just hand claps, drawing attention and creating a sense of urgency. What's going on here? Followed by the aaah part without giving it all away. The tight drums and bass lay the foundation over which singer Bas Prins leads us into the song. Guitarist Mikkie B. Wessels comes in sparingly, all accents, while bass player Quinten Meiresonne and drummer Harrie Roelse keep it together. In the chorus the band let's it all rip.

If I understand things correctly, the band started only this year and already there is a whole album, so I just found out, doing some researching into the band. The band is not waiting and has the songs to kickstart its career. Believe me, there is more to write on soon, so I learned from the first spin on the 3voor12 "Luisterpaal". Taymir makes great 60s influenced poprock with loads of energy, with harmony singing worthwhile listening to.

AAAH is the introduction to more. For now let's celebrate the power of AAAH, the debut single of Taymir that is very much worth listening to. Is The Hague taking back the moniker Holland's rock city number 1? It's starting to look like it. About time too. Taymir is a band to watch.