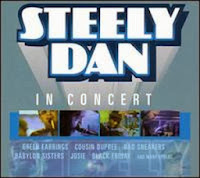 This week I laid my hands on a dvd that I wasn't aware that existed: Steely Dan in concert it says on the sleeve. The pretzel logic concert on the content itself. Whichever it is, we hear and see a band in top form. A band that plays so good, that I asked myself regularly is it worthwhile to go to a show? Shouldn't someone just sit in his chair at home with the best possible audio, close his or her eyes and just enjoy? Nothing happens on stage that warrants looking, just uncanny good and skilful playing of instruments. Just like on record the notes blend so well, the songs are so enormously rich in arrangement, the way the notes and instruments blend and gel. At the same time the songs mostly swing. The rhythm section, of which specifically the drums are very prominent in the mix, always makes a body move. The bass plays these spare, well-placed notes. I just love to follow the lines played. Together with the rhythm guitar, which is extremely funky at times, the accents on the Fender Rhodes, this allows all else in the band to take off when allowed. Whether voices, i.e. three backing vocalists and Donald Fagen, horns or lead guitar, they are always intricately supported by rhythm. This is a main secret behind Steely Dan's success.

Donald Fagen and Walter Brecker are a duo for over 40 years in 2013. With a giant production, for such complex music, in the 1970s, and large hiatuses after. I was lucky to see them play live somewhere in the first half of the 00s. The music is hard to describe. It has the complexity of jazz, the free flowing melody, at times, of a great pop song, the soul of rhythm and blues and at times the fierceness of rock. The combination of all these elements make Steely Dan a unique band. Also a wonder to see this performed live. Flawless, perhaps except for the most human element in the mix: the singing of Donald Fagen. He seems out of wind at times and just a little bit too hoarse. Without it doing any damage to the performance in any way. His timing is fantastic and the interplay with the background singers just delicious. Still, Fagen seems the one mostly less at home on stage from the 13 people on stage.

Walter Brecker does duties and rhythm and lead guitarist and does both without being disturbed. Concentrated to the max, doing his thing. Most on stage get their solo moment, just like a real jazz band, but per song not within the song. Solos remain functional to the song, not improvisation. This show is 100% prepared and nothing left to surprise, nor to desire. This is Steely Dan all the way. Perhaps better than ever before, although I can't compare not having been around in round one in the 70s. The songs on offer are a selection of everything from 'Can't buy a thrill' (1972) to 'Two against nature (2000), the comeback cd.

The music on offer on this dvd is in a league of its own. Perhaps too good to be true. Just sit back, watch, listen and enjoy. It doesn't come much better in this niche of pop.