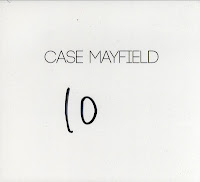 You can listen to 'Orgasms' here and 'Stolen from the sun' here.

Case Mayfield's second album has been given the somewhat misleading name 10, but not if we look at the number of songs on the album, yes, ten. 10 could not have been more surprising to me. His first outing, 'The many coloured beast', was a singer-songwriter album of a man with his guitar, with some embellishments here and there. I listened to it a few times, but it was not special enough to my taste. 10 is his second album in 2012 and completely different. The sound is that of a rock band. Sometimes of the seventies, in other songs more modern, like in 'Builder'. In part this effect is created by the warm sound of an organ and an old-fashioned electric piano. As the songs are extremely pleasant to listen to, the combination is just right for me.

The album kicks off sweetly with 'Stolen from the sun'. The listener is set on the wrong foot as the soft singer-songwriter like song, it could have been the intro to 'Scarborough fair', explodes into an organ extravaganza with a The Doors' 'Touch me' guitar rhythm. Orgelvreten with Case! By the time I was starting to totally rock out, the song's was already over. 1.30 minutes of pure fun and surprise, including a reference to the title of his first album in the lyrics. Stylistically the album may not be a unit, but who wants to hear 10 versions of the same song? A ballad like 'Friend of mine' sits quite nicely next to a stark rocker like 'Pie and strippers'.

Case Mayfield is Kees Veerman of Volendam, the former fishing town on the borders of the IJsselmeer that brought us a long list of artist. Seldom have I heard one of these artist rock like Mayfield does on 10. In some of the tracks that is. 'Orgasms' on the other hand is an almost empty track, with some madrigal like influences where Case duets with Mevrouw Tamara. The stillness at times is total. No fillings of any kind. 'The green mean' is another of the quiet songs, but fleshed out some more and another of my favourites. The winner is 'Builder' though. Rocking in an almost funky way, the song that captured me most.

Case Mayfield seems to be the difficult kind, authentic is an other description. Still an artist wants to be heard and perhaps wants to be friends with certain people in order to be heard and remain heard in the future. On the other hand, shouldn't an artist be judged by his output, in this case 10? Yes, of course he should. I can be fairly short about my judgement: Over the past weeks I've been listening regularly to 10 and for 75% totally liking what I'm hearing, without being put off by the remaining 25%. For an album this is a great score. For all of you out there who do not mind hearing a singer-songwriter rock out every once in a while, this is your album, as both sides of Case Mayfield come out tops. From here on he can go in any musical direction, as he's laid out all his options for us to listen to. It looks like we have another original, real Dutch talent on our hands and a talent needs space and time. Allow him just that.

You can order 10 here