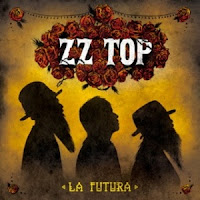 You can listen to 'Chartreuse' here.

A new album from the band in which the only man with the name Beard does not have one. Being around for some forty odd years and having released 14 studio albums, ZZ Top decided to grind it down and come up with some real, real dirty bluesrock on their 15th and first in nine years. If I'm honest they totally surpassed everything I ever expected. The only ZZ Top song I really, really like, is 'Tush' and to some lesser extent the three hits everybody knows from 1983's 'Eliminator' album. And now all of a sudden an album that I've listened through as a whole without any trouble and liking it. I'm really enjoying myself with La futura.

This album is a band on a mission. Coming up with the fattest groove, the dirtiest riff, deep down and in the gut. ZZ Top aims for where it came from: blues rock in its purest form and nothing aimed at the charts or pleasing anyone beyond the people who totally dig the music in this niche of the recording industry. And those are serviced beyond expectation. Bands like Dirty Sweet and The Imperial Crowns can only hope to ever aspire to these hights. Of course, the 29 years between 'Gimme all your loving' and La futura wore Billy Gibbons' voice totally out. Bob Dylan, Tom Waits, we're into that territory. Sand paper of the roughest kind, perhaps even a steel brush, seems to have worked over Gibbons' vocal chords. The roughness of the sound and voice blend. It's this simple.

The tight and in the right places extremely groovy rhythm section, Frank Beard on drums and Dusty Hill on bass, is fantastic on La futura. 'Chartreuse', which comes close to 'Tush', has this rhythm that if played right resembles horse riding to my mind. Galloping must be like this. Chartreuse is a horrible drink, but the song has a groove in all the right places and a great ascending progression that keeps continuing where all others stop. And than a slide solo kicks in. I just love it.

As such everything sounds very familiar. The fun is in the small details that ZZ Top found to fill the songs with to make them stand out and shine. It could be an unexpected break, a one note lick, an added sound or an extra guitar. La futura is full of these little pieces of ear candy. The diversity in places, like the ballads 'Over you' and 'It's too easy, mañana', give the album that little extra, also by adding piano, organ and keyboards. The mouth harp in 'Heartache in blue' is another example. Perhaps my favourite song of the album.

It seems like that producer Rick Rubin did it again. Take an icon and make it totally focussed on what they're good at. This effort led to an album which may just be ZZ Top's best to date. For me it definitely is. Being around for 43 years there may not be to much futura for ZZ Top, but Beard, Gibbons and Hill came up with something deep down and dirty, baby!

You can order La futura here