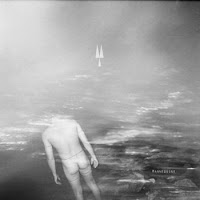 Monster Cat gave this EP away for free on The Pirate Bay. Also a way to draw attention to music. I decided to return the favour and blog on their new EP. Looking for some information on the band on the web, I found that another Monstercat gives away three albums on their website. Be warned, it's not the same. Here's the link if you like to check Mannequins of Monster Cat out.

Mannequins is a surprising album. To me the band and their music was a complete blank so I could step in my first listen without any prejudice. This is slightly scary, as I noticed I braced myself for anything. Metal, tearjearkin' country, free jazz, anything except expecting music I totally enjoy, if I'm honest. And though the album starts with the instrumental 'Initiation' it got me into the mood for the four songs that followed. 'Initiation' starts off with an acoustic guitar, ambient noises and some spoken word in the background, before the guitar picks itself up and the rest of the band kicks in to create a fair melody, a progrock light. At the end the song also leaves it's structure again, fading into silence. Very seventies like. I haven't heard them for ages, so I could be wrong, but albums of Happy the Man and Absolute Elsewhere came to mind here.

The four songs that follow are well structured and adventurous. It's almost like the songs are afloat, lighter than their surrounding, an experience I hadn't noticed any time before in music. And then the voices float on the music. Guitars trickling like water. Musically we're on familiar ground, but the songs have an extra inner quality that surprises me. How come this very beautiful music is given away for free?

The title song has a Pink Floyd like vibe, without sounding like anything near as bombastic as the old progrockers could sound. Still the bass in 'The courier' is a dead give away on influence, but that's not the only one. Midlake also sprang to mind as an influence. Monster Cat is clearly searching for it's own sound, but has come up with a very nice atmosphere on this record, like trickling water and the murmur of a brook in a forest, the wind rustling the trees. The voice of Psycho Cat dwells quite well with me and the interaction with Hentai Cat is excellent.

Monster Cat is a five piece band from ...., well, I do not know. My best guess says the UK. It named itself after a Japanese folklore cat called "Bakeneko'. The five members named themselves after the cat, so from 'Psycho Cat' to 'Copy Cat' play in the band. As long as they render songs like the ones on Mannequins I will put aside my allergies and embrace Monster Cat. Mannequins is a very nice addition to my music collection and I am quite curious on what the next step of Monster Cat will be.

There's also an interview with Monster Cat on this blog. Click here.