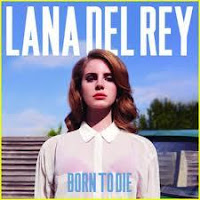 Now that Lana del Rey has been hyped out of all proportions on the basis of one, yes, you read correctly, one hit single and kicked back into her corner as one big disappointment after the release of her, it appeared not so, début album, it's time WoNoBloG delivers a verdict on the basis of what it is all about: The Music.

Of course, the picture of a pretty girl with a fiftyish look draws attention. Her picture(s) draw attention to the shape. The somewhat mysterious hit single 'Video games' did the rest. (Apparently also a video, but I tend to miss videos the last 10, 11 years.) To be honest, I did not understand what all the fuss was about. 'Video games' is not all that good, is it? It's a strange sort of fun, but not like the best song ever.

The album can basically be split into two halves. One the darkish, moody songs sung with a low voice and the other songs more poppy, but still mid-tempo songs, that aim for a slightly other audience. Born to die appears to be an album with a split personality. It has some pearls, like the title song and 'Summer sadness'. In these songs Lana del Rey, born as Elizabeth Grant in 1986, sounds like Lee Hazelwood in a Nancy & Lee song. The songs have the same dark undertones as a Hazelwood song. She definitely has very different voices that she uses on the album and give a distinct signature to her songs. She truly sings, albeit sometimes slightly wobbly, but a relief to listen too after having to listen too much lately to the Selah Sue's and Duffy's of the world.

Born to die is not going to be in my top 10 albums of 2012, but deserves a spot on this blog, just because this is an album that deserves to be listened to. It's pop with a letter P. Pop with a pleasant twist, that doesn't give away all it's secrets after one go and sort of grows on me. 'Radio' is one of these songs. Listen good and there's all sorts of little noises beneath the music, as if there is a second, subconscious, kind of musical level on the record. This gives most of the album an extra quality, a tenseness that does not find a release. IN other words: variety. 14 'Video games' would have been a bit much, I think.

And the hype? Let's not forget who created the hype. Most likely male journalists, all excited to meet with the new biggest next and, on a picture, sexy thing, without having heard more than one song, 'Video games'. And then predictably drop her just as fast. This isn't trendy music to show off with, is it?

So here's the advice of Wo. Give Lana del Rey a chance and decide for yourself. If you like a female voice who dares to go just beyond the commons, you may just find an album that is intriguing and adventurous. Lana delivered an album to be proud of and just about the best she can deliver at present and I bet there's more in store down the well where she found this inspiration.

So, sorry, miss Grant, for not paying for the album. Hopefully I've paid you back this way, as in time and effort, and set more people on the road to your album and music. Apologies from