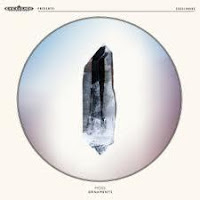 Moss' third album is on the market for a while now. In the past weeks I've played the album regularly, but it remains what I call "a difficult album". I can hear the quality, but it just doesn't relate to me. Maybe it's a small consolation to Moss that the album is up in the same range to me as e.g. Talking Heads' 'Remain in Light' or Simple Minds' 'New gold dream'. Acclaimed masterpieces, but "difficult" albums as far as I'm concerned.

Moss' first album, 'The long road home' offers more up and down songs which I truly liked, 'Never be scared/Don't be a hero' was an album that I lost interest in quite soon and I'm afraid that 'Ornaments' might take the same road into the recesses of my record collection. It consists of a few almost non songs, purely driven by a mood and atmosphere, like 'Tiny love'. It just doesn't come alive, as the only melody left is the vocal and a thin keyboard part. Songs that are nearly stripped of all their basics. It's a very thin line most songs on Ornaments balance on with me and I drop of that line at some occasions. It's as these moments that the quite high voice of Marien Dorleijn, tends to become a bit too much for my taste.

Luckily this is not the case with all songs. The up-tempo 'Spellbound' is quite lively and has a great hook in the form of the part that might resemble a chorus.There's also some great double guitar lines in there. The same goes for the single 'The hunter', which is one of my favourite tracks on the album. Great, great guitar playing. In 'Give love to the ones you love' this atmospheric approach does work for me. Because it's guitars instead of synths? I'm not sure but it may well be.

Some songs remind me of The Shins, but there's also a hint of 80ties acts like Howard Jones and Depeche Mode without the deep synth sounds. The 80ties were not my favourite music era unfortunately.


So where does all this lead me? To the conclusion that Ornaments in my opinion is not the masterpiece some acclaim it to be, but an album that is well made by a band that dares to experiment, dares to take a song apart and see where it leads the musicians. Some experiments are successful, some aren't. Which tends to happen with experiments. Ornaments has several great songs in it that definitely call for listening to the album.

Hearing what the band is capable of live on 3FM (link here), Moss should not be surprised when they run into your personal blogger any time soon. I'm quite curious to hear them live.