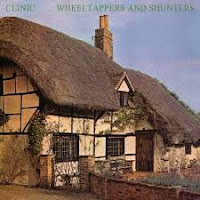 It has been silent for a while around Clinic, the Liverpool band with the singer with his distinct sound as goes for the band itself. I now notice that the silence for me personally took on far more years, having lost sight of the band somewhere in the 00s.

'Walking With Thee' was my introduction to Clinic, the band's second album released in 2002. Four of the songs are on a compilation tape that was in regular rotation until the cassette deck in my car broke down. After that total Clinic silence, until this album was announced a while back.

Wheeltappers And Shunters is totally recognisable as Clinic. The singing by Ade Blackburn and the old synths sounds all around him. With 12 songs the band is on an inspirational roll, so I notice. Still the length of the the album does not exceed the 26 minutes. Songs are a little over 2 minutes on average. Yet, this is Clinic in optima forma. The melodica regularly comes out of its hiding place of the past years, creating the most typical of Clinic sounds.

On Wheeltappers And Shunters Clinic draws from its familiar turf, yet, more modern electronics and rhythms have not totally passed the band by. 'Mirage' is a good example of the hybrid Clinic presents also. Soft rhythms, clinical singing, including the female vocals, and electronic sounds that support the melody. The one minute 12 seconds long D.I.S.C.I.P.L.E. brings out the punk/new wave side of the band, up tempo, rough but with the typical Clinic twist in voice and sound. Even on an old synth one can play punk music, the lesson here is.

On the Wiki entry on Clinic it states the band was formed in 1997, yet two members are there since 1984, while the others are members since the early 90s. All ex-members have left before or just after 1990. Just like the debut EP is from 1996. Something is wrong here, obviously. Fact is, the four members are playing together for 26 years, a long, long time.

Listening to Wheeltappers And Shunters it is clear soon that I'm quite happy with the return of the band and my renewed introduction. Clinic delivers a bunch of intriguing new songs, albeit in a familiar format. The quality is as expected by me. It leaves me with two questions: the first, what is a wheeltapper and the second what is a shunter? I had no idea. The Internet is a great research assistant of course. Let me point you in the direction of trains and leave it there.

You can buy Wheeltappers And Shunters here: