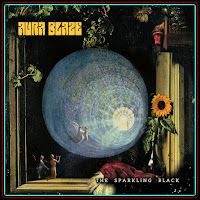 Can a band surprise? Oh, yes. Can a band give me a fright? Sure it can. Can a band land on its feet any way? Hell, yes. That is about the process I went through listening to Aura Blaze's new album The Sparkling Black a few times.

My first listening session with The Sparkling Black was plainly disappointing. I was not hearing what I was expecting to hear. Where did that enormous, huge sound go? Where was the psychedelic hardrock I liked so much? What I was hearing could not be further removed from 'Aura Blaze'. What I was hearing instead was sixties pop with a weird little edge here and there.

So it took me a while before I put on The Sparkling Black once again. It was on route to the gym and I remember thinking this is actually quite fun and so I delved into the album some more. Slowly it opened itself to me, showing all the different layers Rhode Rachel put into his new album. The 60s are all over it for sure, but not the most obvious part of the 60s. Yes, there are loads of harmonies, in fact so many fine ones, but don't expect The Beatles or The Beach Boys. What I hear is more in line with a band like The Move, the little weirdness in the details, but with much better songs. Listen to how free flowing 'Good While It Lasted' is. There seem enough ideas in this single song to fill a whole record by a more average band. 'Good While It lasted' is a pop gem with so many details (and a classic 60s fast fade out), it is almost impossible to keep up with all of them.

Listening to the song I am reminded of how my mind works, its expectations, its longing for familiarity and more of the same. Not being complacent nor satisfied with my first impression is what gets me to my second or even third thoughts, to lend a little something from Terry Pratchett, a writer I've spent many a pleasant hour with through the year. The result often is the discovery of fine aspects in songs I did not hear before. And thus The Sparkling Black opened itself to me by the song and by the spin.

With 'Eyes Of The Rising Sun' a little early Pink Floyd enters the album. Again the song has this little extra and totally unexpectedly Aura Blaze's rock guitar erupts for a few bars, escaped and kicked back into the cupboard where it was locked up. The song does not need it, but it was nice while it lasted. The song in general reminds me of The Hague band The Stangs and its mini album 'Parable'. (Where are they now?)

The Sparkling Dark does not let itself be caught in one single hole. The album is diverse and ever stronger. Also less subtle by the song. With 'Manipulation' another and louder song is presented. Still there is this flavour of the 60s but more in a way Electric Light Orchestra was 60s or even the loudest side of The Moody Blues in the 70s was 60s. The guitar is let loose for the first time for real so we do move into 70s rock for sure, just listen to the harmonies at the end. The Sparkling Dark scores another point here with an extremely strong song. Notice I haven't even mentioned the strong voice of Björn Strid here, who adds some extra pepper to 'Manipulation'.

By then I'm totally convinced that The Sparkling Dark is one of the great releases of 2019 so far. This album is so diverse, ever surprising and not just because of how I opened this post, to the contrary. Listening to it presents the listener with so much different sides to hippie music, etched with more modern influences, that there are new details to discover with each spin. This makes The Sparkling Dark an intriguing album as well.

All the songs on this album show that Rhode Rachel is not just a good songwriter, but also a great arranger, singer and producer. And an art lover, as the artwork in itself shows. The Bosch figures in there are too cute in a cover that is simply intriguing. This is an album very much worth while to get acquainted with, deeply. So let me leave you today with giving the advice to start doing so here:

and buy the album while you're there anyway.