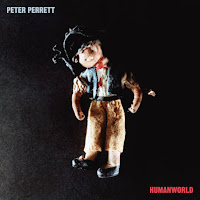 In January of 2018 we posted the very positive review by Erwin Zijleman of Peter Perrett's previous solo effort and comeback album 'How The West Was Won'. In June of 2019 Humanworld is released and I thought to take it on myself to delve into the album.

Of course Peter Perrett is associated forever with his circa 1980 band, The Only Ones. I have a faint memory of a song or two I must have heard at the time and know for certain I have one on a compilation album I bought because it held the Romantics' 'What I Like About You' on it. After the demise of The Only Ones things were not totally silent, but for at least 20 years it mostly was.

For me Humanworld is my re-introduction to Peter Perrett's music. Two things strike me immediately while listening to the first songs. This is superb alternative pop music and Perrett sounds like his voice was run over by an 18 wheeler, left out to dry, set alight and extinguished with pure alcohol to stoke the flames up a little higher. In short this voice has seen many downsides. It gives Humanworld an authentic sound, like a Malcolm Holcombe light.

So once this hurdle is taken a host of pop songs present themselves. Nothing brilliant but a product of working hard at songs and finding the little details that make a song special, make it stand out. Angelic female voices behind Perrett' battered voice or a violin that enters a song for a small contribution, changing the whole outlook of a song. An early 1980s guitar burst or two can be spotted easily on the album. Showing that a band like Franz Ferdinand certainly has listen to The Only Ones when crafting its party music early on in this century. In his turn Peter Perrett has listened to these alternative pop bands of the 00s and 10s, incorporated their pop feel and found his way to a label releasing and promoting a few of these bands.

In my opinion Peter Perrett is still very much a part of the music that was cutting edge around 1979. The change is that the straightjacket that kept band confined within a format instead of blossoming and embracing other influences has been taken off. This results in a perfect pop song like 'War Plan Red'. Just imagine what could have happened here had Perrett's voice been at full power. Behind him the scene is ripped apart. Guitars rip things apart at full force. As if the war from the title is ravaging the streets of New York already.

Heaving heard Humanworld several times over the past weeks, I can only conclude that I am very pleasantly surprised. Peter Perrett has found himself a new voice and certainly was inspired to come up with a bunch of great songs. Working with his two sons, Jamie and Peter Jr., seems to be doing him a whole lot of good. It all adds up to a fine album that deserves to be heard by the thousands.

You can buy Humanworld here: