It's Okay To Talk. allusinlove 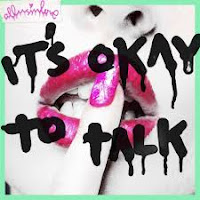 Today we focus on three releases once again. The first one comes from the U.K., Leeds to be exact.

Why make things difficult, when you can make things easier for yourself? This Dutch proverb certainly is applicable to It's Okay To Talk. allusinlove starts playing and doesn't stop until the song is over. No inventive rhythms, no stops and starts, no dynamics, just full out and play till the end. At least, that is the impression the album leaves me with when I'm done listening to this sunburst, 11 song, punkpop pleasure of a record.

Not long ago allusinlove was called allusondrugs, a change of life time and lifestyle. allusmarried, allusonkids and allusdivorced are suggested for future names. Just kidding of course. With It's Okay To Talk allusinlove brings the world a fine punkrock album that brings enough of the past and the present to sound current and familiar at the same time. The energy and violence in punkrock stand at the service of the song. Something U.K. bands in general seem just this little better in than their U.S. brethren.

allusinlove is a foursome from Leeds (and previously released a live album called 'Live At Leeds'). It's Okay To Talk is the band's first full length album. Jason Moules (Vocals/Guitar), Drey Pavlovic (Guitar), Jemal Beau Malki (Bass) and Connor Fisher-Atack (Drums) found Catherine Marks willing to produce the record, hoping for a Wolf Alice effect, no doubt. Like this band allusinlove manages to capture an energy source on record. An energy that undoubtedly is unleashed live.

When listening more closely it becomes clear that It's Okay To Talk is far less one dimensional than I started this review with. The fact that I think it be so, does credit to the energy captured on record and to the playing and production duties. You ought to know enough by now.