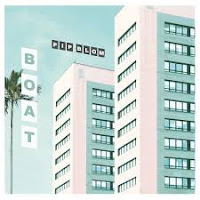 My introduction to Pip Blom was not a successful one. Playing support for Franz Ferdinand in Groningen, nobody in my vicinity was really willing to listen and the sound was bland, not allowing a lot to come through. In other words, I could not discern even a single decibel of the excitement some people already showed over a year ago for this band.

Now I know that playing support can be a frustrating experience but at times also a triumph. Keith Caputo e.g. before Travis in the winter of 2000. Not for Pip Blom in Groningen's Oosterpoort.

It is June 2019 and a year and a quarter past Groningen. Again there is a lot to do about Pip Blom, the band named after its singer/guitarist. And yes, I am starting to understand why, listening to Boat, but also have some reservations. Allow me to explain the why and why.

Boat starts with a few great songs. 'Daddy Issues' and even more so 'Don't Make It Difficult' are great songs. Every fan of the tandem Barnett-Cloher can draw these songs extremely close to their hearts. Pip Blom is able to emulate that ramshackle sound perfectly and add some excitement of its own in there too. 'Don't Make It Difficult' even manages to put some The Bangles rock and innocence into the song. This makes the song a beautiful hybrid of alternative rock and pop. Only the very best get away with this. It should make a great single for Boat.

From here Boat takes a turn away from pop and takes its listeners out for a tour around alternative rock. The ramshackle guitars are everywhere, going all the way back to The Velvet Underground. That 60s band's influence runs large in a song like 'Tired'. With a huge difference, 'Tired', again, has a great chorus. Four songs into Boat, The Netherlands can rest assured: we have our own version of Courtney Barnett and, although I still write this with some hesitation, with at least a couple of better songs. Time will tell really here, but I know no hesitation here to mention it. Again, just listen to the few subtle changes in 'Bedhead'. No matter the similarities, I can't hear something like that with Ms. Barnett. Now Jen Cloher's last album, that is on the same par.

So we've looked a the upside. I already mentioned that I had some doubts as well. They mostly come from the same source. Pip Blom does hitch nicely along the path paved by Courtney Barnett. The band still needs to find its own voice. Which of course is perfectly okay for a first album. My other point is that I do lose interest when I get deeper into the album. By then the songs simply seem a little less interesting. The same I had with the first album of Dakota recently. But, just like that album I fully give Pip Blom more than the benefit of the doubt. Boat is an extremely strong album. An album that captures a lot of excitement and provides interesting details all in one.

With Boat Pip Blom shows tremendous promise as well as presenting material that truly must be the best it has within itself in the right here and now. Like the song called 'Ruby'. A seemingly normal sounding song can light up a room within seconds. Pip Blom achieves this feat easily. Hopefully I can catch the band in my neighbourhood soon.

You can buy Boat here: