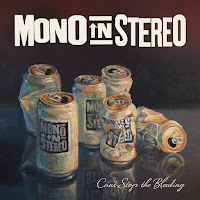 It is not a pretty sight to the left of these words. The last drops have been wrong out of the beer cans and out of Mono in Stereo it seems. If the band has gone all the way in writing and recording these five songs they ought to be great, right?

Fact is that Mono in Stereo provides its listeners with a lot of energy. There may only be five songs but they are totally fulfilling if not satisfying.

It all starts off with 'The Conversation'. A song that almost sounds familiar. It took me a few sessions to realise what I was reminded of; Foo Fighters of course. With minor differences in the details. The sound is more down to earth. This is not an overblown production but a song made by mere humans with a talent for alternative and garage rock. A song I could imagine (in a wild dream, true) playing and making myself. The faint traces to Gin Blossoms' hits of the early 90s are also pleasing.

The surprise comes in song 2. After a strong guitar riffing intro a warm organ joins the whole and immediately changes the texture of the album. 'Different Kind Of Man' scores immediately with me because of this. Mono in Stereo shows it is able to look behind the wall of guitars and provide the world this little extra. Sometimes a small thing like that is enough to make my moments of enjoying new music.

Mono in Stereo is a band from Rockford, Illinois. Billy Maynard, Kevin Kalen, Tim Spinler and Mike Melenas are responsible for capturing all this energy on record. Men that have been active in punkrock music for over twenty years and now play together in a new band. After releasing 'Long For Yesterday' in 2015, Can't Stop The Bleeding is the band's second effort. As long as it keeps haemorrhaging songs like the ones on this EP, my advice is not to staunch that stream of inspiration too much. It is, unfortunately, the title song that I like less, but then four out of five is a great score in my book.

No, Mono in Stereo is not a band that plays original music. For that there are too many references to bands like the ones already mentioned and e.g. The Hold Steady. The fact that the music is good and I am enjoying myself here, is far more important. I listen to music primarily to be entertained and let that feature obviously be one of the strongest traits of Mono in Stereo.

You can buy Can't Stop The Bleeding here: