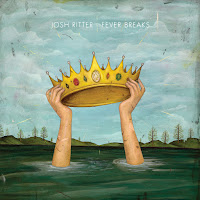 Today we look at three different records again. We started in the U.K., crossed the sea to Ireland and now cross one sea more, the Atlantic Ocean to the U.S.

It must have been one of those right record at the wrong time moments. After the well-received 'Sermon On The Rocks', I had expected a lot from the new Josh Ritter. Instead I heard nothing in the songs I heard on Fever Breaks. Just some bland country rock and that was that. Until someone sent me the cd anyway and as a courtesy I played it on the stereo. To be captivated in the very first seconds. 'Ground Don't Want Me' rocks in a great way. Josh Ritter proved to be in great form.

For over a decade Josh Ritter seemed to remain that artist, to me, with that one great song. 'Man Burning At Both Ends' is a fantastic rocking song in the middle of acoustic songs and ever more complex acoustic songs followed later on, until I gave up on Ritter. Until 'Sermon On The Rocks' came along.

I can't tell what happened along the way, as I had stopped following Ritter somewhere in the 00s. Whatever caused it, I like this new iteration of him a lot. Just listen to 'Old Black Magic' and especially to that little organ sound that nags in the middle of the guitar eruptions and solidness. Like that mosquito right after the lights have gone out. Except that here the sound sets the song on fire. 'Old Black Magic' is a song with a great groove, where Ritter's edged voice fits like a glove. The guitars work towards a great climax. That comes in the form of a great guitar solo. Rough, loud and rocking in the dirtiest of ways.

With 'On The Water' the speed is taken out of the record, but not the intensity. And here I have the secret of my new relationship with Josh Ritter's records. There is an intensity that makes them special, that draws me near. Not in a self-destructive way, this is truly positive. That has everything to do with the melodic strength of the songs. 'I Still Love You (Now And Then)' has the same melancholy mood that makes a lot of David Sickmen of The Hackensaw Boys' songs so good. To sing along with, eyes closed, simply undergowing the music in the most positive way possible. Memories that everyone has are worded here. Memories of things past, things long over where no matter what may have happened, something good is remembered. 'I Still Love You (Now And Then)', that is the way life is.

This is just the beginning of Fever Breaks. So many good things follow. Even an anti-Trump song in the form of 'All Some Kind Of Dream' on the refugees at the border of the U.S. A song that could have been a Bob Dylan song, long ago, with even a few hints at Dylan in the lyrics. No anger shows, just resignation, mixed with some indignation. The storm comes in the intro of the next song, 'Losing Battles'. Going to battle like Neil Young with a loud, distorted guitar.

In fact, despite the fact how my ears were screwed on wrong at first, slowly but surely I am being convinced by Fever Breaks that this album is Josh Ritter's best to date and one for the longlist of best albums in 2019. I am not a fan of Jason Isbell's music, but as producer and working with his band the 400 Unit the combination with Josh Ritter works a miracle.