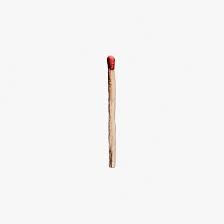 What a cover! Rammstein presents us the match to light up everything. Like its new album does. 'Rammstein' lights up the day, the night and everything in between. God knows why it took the band 10 years to come up with a new album. In between there were enough tours and live cds/dvds but no new songs. So looking at 'Rammstein' I can conclude the band produced on average one song per year. If it takes this long to come up with an album full of quality like 'Rammstein' is, so be it.

The album opens with the first single that was released from the album. "Deutschland' made national newspapers, the news, everything. Rammstein is back, the message was overly clear. Controversial, everyone could read something in the shocking video and "Germany" is a tall, black woman. The video must have taken days if not weeks to shoot. All the publicity works, the cd is sold out all of the time.

But is the hue and cry justified? Oh, yes. 'Rammstein' musically is at the level of my two favourite Rammstein albums, 'Mutter' and 'Reise Reise'. A lot has been said about the lyrics already and I tend to agree that the subtlety and scariness of Till Lindemann's lyrics are not at the same level as then. That's the way things are. To be honest, if wanted to read lyrics I would buy a book. Music is about music and melody. 'Rammstein' scores nearly perfect here. The Tanzmetal is in full swing. The supertight, hard drumming is where all starts, the deep bass fills in the space behind the two guitars that play so extremely tight. Over this all it is the keyboards that are allowed the fantasy, the playfulness and a huge part of what sets Rammstein apart from most other metal bands. The dark and deep talk-singing of Lindemann is what remains to turn the deep darkness of Rammstein's music into songs. (And then there are lyrics.)

The true strength of Rammstein comes forward in the slow starting 'Puppe'. It starts ever so soft and slow. You know something is about to happen. The situation described by Lindemann is not a normal one. When is the explosion of total utter madness to come? Hearing it erupt, it is almost inconceivable that Rammstein is able to start this song, so soft and delicate. How can this band have it within itself?

Because of the variation in musical approaches throughout the album for me the album just grows. With Rammstein it is not just about force. The band is a master of dynamics, in sprinkling little bits of brilliant melodies into the strength and force. 'Was Ich Liebe' is another great example of the heights Rammstein can reach for successfully. In my opinion it holds all a good songs needs to contain. Whether it is a metal song or a pop song.

When with 'Diamant' the mood goes totally down, Rammstein has shown the world once again all the elements that make it a great band. From the epic metal song 'Deutschland' to the metalpop of 'Radio', the madness of "Puppe', the great pop in 'Was Ich Liebe' and a true, beautiful ballad in 'Diamant'. 'Rammstein' contains it all and in a way that it can compete with what was before, successfully too.

Only one question remains. Do I like 'Rammstein' this much because it took so long before a new song reached me? My guess is not. Simply because if the songs had not been up to Rammstein's par, I would have known immediately, wouldn't I? They do and I'm the better for it.