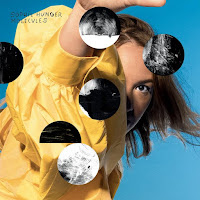 Sophie Hunger is no stranger to this blog. Albums and shows have been reviewed, songs have come by regularly in the 'Kairos' radio show, the Concertzender radio show created by co-editor .No.

After a period of silence Sophie Hunger returns with a new album. Wo. sets himself to listen and undergo the new album of one of his favourite new artists of the 10s.

There are several Sophie Hungers it seems. She's not content with the Sophie Hunger I have come to appreciate so much over the past five years. Her previous album 'Supermoon' was my favourite album of 2015 and still is played regularly (a position the album had to share with Broeder Dieleman's 'Uut De Bron'. His new album, 'Komma', is released 7 September). All those expecting a new 'Supermoon' are to be utterly disappointed. Nothing of the lush sounds of that album remains on Molecules. Especially the guitar madness has gone.

In fact, on her the new album Ms. Hunger has stripped her sound bare. To the molecular level of her music. The exuberance is contained in electronics, open emotions something to be avoided. Again Sophie Hunger reinvents herself. It is harder to love this music, at least that is my impression from the first few listening sessions. I remember being surprised listening to 'Supermoon' after having become a modest fan on the basis of 'The Danger Of Light' and the show I visited. She has surprised me again.

The start of the album is so modest. Silence is what starts Molecules. The electronic, synth bass that opens the album for several songs remains the most exuberant piece of music on the album. 'She Makes President' is an exotic form of dance hit. All is electronics in beats and atmosphere, elementary synth chords is what makes up the support of the vocal melody. To all intent and purpose 'She Makes President' is a musical statement. Here's the new Sophie Hunger. It is only her voice that reminds me of what went on before.

'Sliver Lane' opens with an acoustic guitar. In all ways a much smaller song than the one opening the album. At the same time a more familiar song. Electronics are still present, but so is a bass sound plopping away in the best Air tradition. A warm organ finishes this superb song. 'Sliver Lane' is a song that provides the fan of previous Sophie Hunger incarnations the key to her new album.

That key opens the majestic 'There Is Still Pain Left'. It is possible to join emotions and cold electronic beats and sounds. There obviously is some pain left within Sophie Hunger now someone is kissing somebody she used to kiss.The feelings pour out of her, where the music is mostly held in check. Despite the fact interesting things are going on musically, the focus of the song is totally on the singer. It's the singer, not the song 100%.

Fast beats return in 'Tricks'. The typical Sophie Hunger singing tricks are the only thing reminding me of anything before. The whole song comes out of a box. Well several probably. 80s Synth heroes are brought to mind immediately. Hunger also shows her love for Annie Lennox here. I'm not reminded a little here of early Eurythmics hits. While being different totally as well.

The message is clear. With Molecules Sophie Hunger has set another step in her development. One I did not see coming. At the same time her quality is undeniable. Even in an at times cold setting of electronics and experimental beats, she produces music to warm my hands on. It took me a few listening sessions, but I am already convinced that Molecules and I are going to have an outstanding relationship. Sophie Hunger will surprise many of her fans with her new album, some may not be pleasantly surprised. Those with open ears, the ones who allow themselves to be surprised will discover a beautiful song like 'Electropolis'. Despite the dark sounds beauty radiates from it. As if Sophie Hunger cannot help herself here. Listening more often to Molecules reveals that there is a continuation from 'Supermoon', it is just hidden behind the differences in sound and approach.

More and more I am becoming convinced Sophie Hunger is one of the more important artists of this decade. Most likely this is her last record of this decade. She's ready for anything in the next. Late October she returns to this country to play the album live. What to expect then? Stick around and read about it.