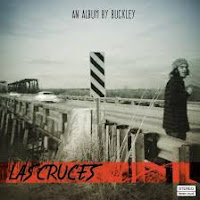 Buckley? That name is forever joined to Jeff. An angel descended on earth to leave us one sublime album before he returned to his rightful place. Not unlike the angel in A.N. Ryst's fantastic novel 'De Harpij'.

So Buckley comes with a legacy. I am pleasantly surprised to hear the opening notes of 'Bakersfield', the first song on Las Cruces. As if Slobberbone has reincarnated in the late 10s. It is a portion of fantastic rock in the country variety that I am served. In the guitar there is this element of melancholy sadness, reflected in the lyrics: "In Bakersfield I let you down". The consequences are dear listening to the song. A Neil Young like solo guitar comes by as icing on the cake. 'Bakersfield' is a dream of an opening song for an album like Las Cruces. Simply one of the best songs I've heard in this genre since the demise of Slobberbone over a decade ago.

Buckley is a singer-songwriter living in Austin, Tx., where he landed after working in a band called Guilded Splinters. Over the years he has acquired the skills to excel in several rock and alt-country genres and carry them home. In his music a lot of influences from the 70s can be heard. The already mentioned Neil Young (and Crazy Horse) of course but a band like Eagles is certainly not far away. More contemporary Ryan Adams certainly rings true, but then he dipped his creativity in the same historic wells. At the end of the alphabet there's ZZ Top ('Three Chiefs').

How good Buckley is shines through in the third song on the album. 'Devil Slide' is a slow song with a standard chord progression. The way it is played out makes me listen to every note coming by. The crashing of cymbals filling in the background provides the song with a load of tension adding to the feel of the song in no small way.

Like Timothy Showalter of Strands of Oaks Buckley knows his Neil Young. Both can come close to the old meister. Buckley is more consistent in his approach and writes the better songs in my opinion. Is more varied as well. Strand of Oaks has already made a name for itself. Something Buckley still has to do in this country.

With Las Cruces he has to be able to find the people that appreciate his music. The songs Buckley presents are varied, have quality and are played at a consistently high level. The true quality shines through in the final song 'Perfect Storm'. Slow, full of emotions and feeling. The contrast with 'Bakersfield' is huge, but there is a common denominator. Buckley captures his experiences and the emotions they conjure up in perfect musical ways.

Las Cruces is an album that has the potential to grow into a staple in the country rock and alt.americana corner of the musical spectrum. It may all have been done before, but when it is so much fun as Las Cruces is, who cares?. Not

You can listen to and buy Las Cruces here: