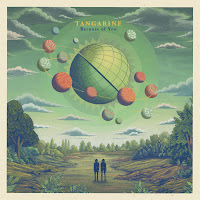 Here in our home the Twins making up Tangarine are fondly called "Pluizenbol en Pluizenbol", to be translated as "Curly and Curly", ever since we saw the duo perform as support for Tim Knol somewhere at the beginning of this decade. Several albums sw the light of day since then, but somehow they didn't really agree with yours truly. And here I'm writing on Because Of You, Tangarine's latest album.

Arnout and Sander Brinks are identical twins with all that comes with that. I remember seeing them play so naturally together as if they were one. The one fully supporting the other, totally complementary to each other. In such a way that I would not have been surprised to see them melt together in a literal sense (and back). The story about 'Because Of You' is that they have separated as individuals, each writing his own songs and lyrics. The result is a much harder album than I've ever imagined hearing from Tangarine. It is probably because of this reason I am writing on the album. The Brinks brothers sing lower. The result is a far less one dimensional band. The music is varied and truly interesting.

The album was recorded in the southern desert of the U.S. at the Calexico studio. Joey Burns plays bass on most tracks. The other musicians are the touring band members of Tangarine. Calexico, at least what I associate with that band, is around the corner in 'Nobody Wants To Be The One'. A high sounding Mexican trumpet meanders through the song. 'Ribbons' is a soft, bare song. The desert sound here is hidden in a soft percussive sound mixed into one of the corners of the song, as if a horse is galloping at full speed. Totally at odds with the rest of the song. Dark and brooding it slowly goes about its way. A bit of darkness on a record that certainly is not a beacon of light. The influences range much further though. There's a dash of 70s singer-songwriters here, a slight smattering of psychedelia, but also an element of rock there. All is woven into the different songs.

A few songs into Because Of You I notice the mood of the album getting a hold on me. I feel more tired than I did circa 20 minutes ago and a bit glum to boot. "There's no need to worry", is the message I'm presented, so it must be o.k. after all. The use of a pedal steel guitar gives the sound something melancholy as well.  "I will be the pain of yesterday", the brothers sing in 'Echoes', a song that takes the tempo even further down. The kind of song that begs listening to. Strings move in, making the song even more laden. An electric guitar starts crying out. The pain obviously is real here. The acoustic sequence seems illogical compared to what came before, but broken hearts are for real.

Because Of You may be a much darker album than Tangarine has released before, it also is the album with the most depth. At point of writing, I'll admit, I still have to decide whether I think this is a good album. It can still go both ways. What I do notice that Because Of You holds elements that will work in its favour. There is an undercooled passion throughout the album, just under the surface of the Brinks' singing. A passion in the instrumental sequences, showing the "pain and sorrow" they sing about regularly. Pain is the theme here. Musically there is more than enough to discover as well. As I said this album is far from one dimensional.