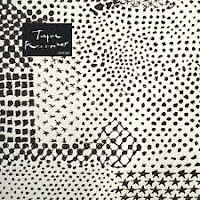 My tape recorder lies somewhere in storage with all my tapes. MP3s and streaming are the basis of my music experience these days. With an exceptional cd here and there and for the albums that really make an impression vinyl. It may well be that this album will become one of those exceptions.

Bayonet Records sent me an email announcing the release of this album. As I had never heard of Lionlimb, it did not get to the top of my list. That changed fast after I typed in the name on Spotify. Something of an addiction was what happened next.

The music is so serious, so solemn. With instruments associated with classical music in abundance, combined with rock instruments Lionlimb creates a hybrid of the two musical genres. A firm drumplaying keeps the music in the rock realm, while at the same time Lionlimb has nothing to do with symphonic rock. The recently reviewed album 'Current' by Belgian band Madensuyu has a similar disposition, only based on piano and drums.

What I noticed right after is the singing. Who sings like this? Yes, Elliot Smith. The same modest, soft-toned and self-conscious way of presenting the vocal. Mixed just right so that the at times loud music does not interfere with the delivery of the singing. A balance that works so well on Tape Recorder.

Lionlimb is from Nashville. In nothing, at least to my relatively untrained Nashville ears, I recognise anything remotely country. There's simply no reference or direct connection. The band members' background is the band of Angel Olsen. So, without realising it I may have seen them play at Paradiso, 2014. In 2016 the band released its first album 'Shoo', now followed by the six song album Tape Recorder.

What impresses me no little is the way Lionlimb is able to change the mood of a song. In the title song, there is just Stuart Bronaugh's soft voice accompanied by a piano, played in the style that is favoured by radio program 'Kairos' on Concertzender. (Yes, I've tipped .No.) Strings come in, created an even more serious atmosphere. After a short string intermezzo a drum kicks in at 3.38 minutes, slowly changing the structure and pace of the song. The piano switches to a rhythmic one note playing, while the drums slowly move towards an "Animal" of the Muppets Show franticness. And then they fall away, leaving the other instrument behind, orphaned, yet strong. Changing the mood once again. The drums, played by Joshua Jaeger, always sound prominent, if present.

Tape Recorder holds six of these intricately designed songs. Where not a lot is what it seems. Lionlimb dares to change the structure and mood of the songs. In 'Swallow's Song' in such a way that the next song appears to have started. When it hasn't. Instruments and melody can simply drop away to be replaced by something completely different. I am on my toes the whole time to keep up and try to comprehend what is happening. This will change with more listen sessions of course. For now I am tremendously enjoying myself.

You can listen to and buy Tape Recorder here: