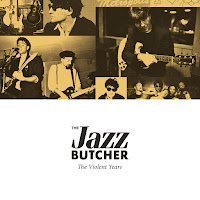 With The Violent Years Fire Records releases a second box set with albums released by The Jazz Butcher. The band's second album, 'A Scandal In Bohemia', but first in the box set 'The Wasted Years', totally surprised me and may actually make it to the list of my favourite albums of the 80s. This surprise made me curious for this collection of course.

The first album in this box, 'Fishcoteque', surprised me also. More in the sense that the band put a challenge on itself to put the words "Jazz Butcher" in each song, than because of memorable songs. So I quickly skipped that album, as what I think doesn't say anything about how others perceive it.

I settled on 'Big Planet, Scarey Planet', the second one in the box. The album is not as eclectic as my introduction to The Jazz Butcher, but I recognise a good song when I hear one. 'BPSP' is full of them. It was released in 1989 and I'm trying to do the mental step to what I used to hear and listened to at the time. There's a difference here, as I'm sure you'll appreciate. My 60s heroes came with strong albums. Nearly without an exception. I heard The Stone Roses for the first time. Of course all sorts of house and rap, my generation gap in music presented itself to me. New music passed me mostly by, not having a lot of money and barely coping with keeping track of my old heroes. So lending cds and taping them became a standard, but does any new music of the day stick out? Lenny Kravitz, I suppose and I tried to get my ears around REM and found myself trying at best. Tears for Fears' third album was alright (side one). There must have been others, that I do not recollect straight away.

So much for history. The Jazz Butcher passed me by at the time and probably would have, had I heard it at the time. 29 Years later my ears definitely work differently. The Clash clearly has left a footprint on this album, while The Jazz Butcher is not afraid of letting a little pop in to its take on punk and new wave music.

The line up had already undergone major changes by the time this album was released four years later. Discogs names Alex Green, Kizzy O'Callaghan, Laurence O'Keefe, Paul Mulreaney and The Jazz Butcher as members. The latter being founding member Pat Fish and main, though not exclusive songwriter here and co-producer with John A. Rivers. The band has a long line of past members as Wikipedia shows.

Setting aside a few experimental, perhaps to be called sci-fi songs seeing the title of the album, songs, the atmosphere of the album is quite consistent. High sounding guitars lead the way in a punk, pop infused album of up tempo songs with a fairly upbeat feel. No one is cheering out loud, but no one is wailing or crying either. Add an exuberant saxophone here and there and here's Big Planet, Scarey Planet. Things seem to be just fine.

The album starts with a punked up version of 'More Than A Feeling' by Boston. The lead guitar has a similar lead melody in the verse. The music is far to subtle to be called punk, the intention is what is telling, as is the singing. 'New Invention' is the kind of song a band would want to open an album with. Strong, varied, attention attracting loud. Fun little things happen while the rhythm chugs onwards.

The country punk of 'Line Of Death' is the starting point that makes clear how varied BPSP is going to be. The Village People's 'In The Navy' comes by, albeit disguised. The Jazz Butcher tried all sorts of styles on 'A Scandal In Bohemia' and does so on this album. Something the listener needs to have the stomach for. 'The World I Was Looking For', the fourth song, is propulsing itself forwards the whole time in a way that makes me smile the whole of the way. The better songs of The Clash come to mind, without having so much to do with the music of The Clash as such. The sax solo adds to the joy no little.

'Bicycle Kid' has a funny lyric but musically it doesn't do much for me. Like some songs on Robyn Hitchcock's latest, eponymous album. 'Bicycle Kid' has a full 60s flavour though, unfortunately the kind I do not like specifically. The Jazz Butcher returns with 'Burglar Of Love'. Listen if you can guess what guitarist inspired the intro. A strong verse vs. a not so strong chorus. That usually is the other way around.

Being so varied Big Planet, Scarey Planet is in fear of losing the attention of a lot of people. The strong instrumental melody of 'Do The Bubonic Plague' is seriously hampered by the spoken word vocal. Luckily the album moves towards the ends with the kind of song indie bands still like to write and play to this day. 'Bad Dream Lover' is the kind of upbeat song that makes someone want to put the record on again. It might have been a perfect ending to an album holding a lot of interesting songs, were it not for 'The Good Ones'. The Jazz Butcher presents a combination of The Kinks' 'Better Things' and 'Pale Blue Eyes' by The Velvet Underground. Certainly interesting but not the best song on the album. As a whole all these songs are worth investing time in to get to know them better. Even 29 years after the original release.

You can listen to and buy The Violent Years here:

or listen to The Jazz Butcher on WoNoBlog's Spotify Playlist: