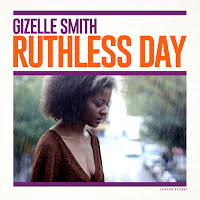 In iTunes Ruthless Day by Gizelle Smith got the tag "electronic", so that was an easy decision: not for me. I won't say it's a 100% but surely close enough. The good thing at times is that I forget what I receive, so clicked on the album and was surprised to here music that is nothing but a feast to listen to.

So here I am, stepping out of my comfort zone and listening to an album full of soul, R&B with sprinklings of funk, but not without a lot of pop feel. Instantly danceable with a relaxed inclination aiming for duration and not instant satisfaction.

Gizelle Smith is named Gizelle Françoise Jeanine Golebiewski in daily life and was signed by a Hamburg label where she released three 45s and one album with The Mighty Mocambos. That makes Ruthless Day her second record and The Mighty Mocambos she started out her career with are no longer in sight, at least on the title of Ruthless Day.

If Gizelle Smith is from Germany, it is impossible to hear for my Dutch ears. This album is in production as U.S. as things come and so here's globalisation for you. Beyond doubt Ms. Smith will have some import tariffs slapped on her record before she knows it by the Trump administration.

Have I heard music like this over the past years? Certainly, but somehow that music never reached me the way Ruthless Day does. Can I put my finger on any reason? No, not really, I find. Even Anouk has recorded a few songs like this, but I've never been a true fan of hers, with only a few, mostly rock-hybrid songs as exception. What I like is Gizelle Smith's voice and that the music makes me feel happy. There's an extremely positive vibe coming into my ears, instantly infectious. My limbs feel like moving without my brain telling them to it seems.

The horns in several of the songs are of the kind that remember me of the best soul songs of the 60s. The rhythms are certainly more modern in sound, making the blend of old and new sticking out more. Ruthless Day is influenced by, yet goes its own way. At the same time this music reminds me of the first album of Joan as Policewoman (with a lot of instruments added to the sound). Several songs on Ruthless Day have that same sense of seriousness. The happiness in the music and the seriousness are not mutually exclusive Ruthless Day shows in an almost off-hand kind of way.

There's another thing Gizelle Smith does well. She sticks to her limitations. She's no Mariah Carey and does not try to be. By keeping within her vocal range, which tends to go deeper, she shies away from going too high. This music often invites vocal antics that I usually abhor and there's nothing of the kind here. So another point scored.

Yes, Ruthless Day is well out of my comfort zone. Yet the album just feels good. It holds the right mix of a lot of simply very good things. And it took me nearly a whole album to figure out who the other artist is I'm remembered of. Joss Stone of course.

You can listen to and buy Ruthless Day here: