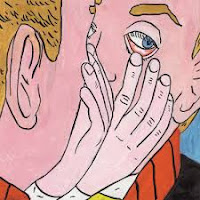 Another album from Germany on the blog. It's highly likely that every cliché in the rock book comes by on Yada Yada. Who cares when the music Odd Couple produces is as much fun as it is?

What to make of the title Yada Yada? Of songtitles like 'Bokeh21'?, 'Katta'?, Fangdannen'. All the other titles are just as short. 'Vielfrass', 'Stiff', 'Robotik'. It all suggest a sense of weirdness but most of all directness. Direct Yada Yada is and nobody got hurt by a little weirdness in music.

The album opens with what seems like and up and down rock song, 'Bokeh21'. The weirdness comes in through the vocoder voice and the use of synthesizers to create blips and blops that can be heard on record since Roger Waters ordered a kind of synthesizer while recording 'Dark Side Of The Moon' in 1972. The drums never relent, it is the rock guitars that are traded in for the synths.

Odd Couple is of course a, this year 50 year old, film turned into a television series. I think I have seen some episodes at some point in time. Now Odd Couple is a band from Berlin. Is it a duo or a trio? I'm trying to find out for you. On the publicity photo three persons are depicted. In every write up I find on the band just two names come up: Tammo Dehn and Jascha Kreft. That will need to do for now, at least until some more research gave me the name Dennis Schulze. All three are involved in the songwriting at some point or other. Allowing for several exceptions the instrumental division is Dehn drums, Kreft guitar and keys, Schulze bass and then some. After 'It's A Pressure To Meet You (2015) and Flügge (2016), Yada Yada is Odd Couple's third full length release.

According to the bio the band chose a more experimental and grown up sound for its new album. I can't tell at this point in time. Odd Couple has found itself a firm rocksound in which electronics and experimentations in sound are never far away. At the same time a punkrock attitude shows through, giving the album a kind of solidness not comparing to "simple" rock. The vocals are of a relaxed nature more in tune with the hippies of the 60s. Psychedelia is certainly involved  As you can read Odd Couple does everything and then some not to be pushed into a single corner. It is not to be labelled that easily. Just listen to 'Fangdannan' and fly with the butterflies, "wie eine Schmetterling". The electronic sounds involved in 'Fangdannan' were unheard of in 1967, the effect is exactly the same. Fluid projections on the far wall, a joint or spliff in hand and off you go.

Odd Couple is not a band that opts for the easy way. A song is never just a song. The experiment never far away. Things are tried out and many ideas were probably left on the studios floor for what they were. Discarded simply because it did not work or better ideas presented itself. Just listen to how 'Robotik' develops. The song has so many twists and changes. Many ideas will have fallen through here and dispensed with. It must be fun, exhilarating as well as frustrating to work within Odd Couple. Unless one person decides, but my odds are on that not being the case, as there are two principal songwriters who will both have their ideas. The same goes for Schulze when he contributes.

Yada Yada is an album that is interesting for a few reasons. In other words it stands out. It may not be exemplary, there is more than enough to enjoy. From the first rush, as described at the start of this post, to the more in-depth acquaintance Yada Yada holds up. Another fine album from Germany it seems. There were years on end I didn't hear a single one and I can already predict there will be another one in about a month's time.

You can listen and buy Yada Yada here: