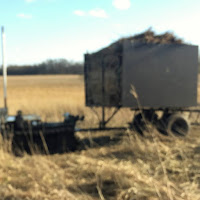 We only reviewed the recent EP of M-Jo this January and already a new, full album has been released last month. M-Jo plays an interesting form of indie-rock with those little turns and twist that can make the genre so interesting. 'Simple Life' provided just that, so made me quite interested in what M-Jo presents on its new album. (Click here for the review of 'Simple Life': http://wonomagazine.blogspot.nl/2018/01/simple-life-m-jo.html)

Looking at the Bandcamp page of M-Jo a bit better I notice releases under the name M-Jo go back to 2002. You'll find many releases there. As this is only my second release by the band, I can listen with a fresh ear to the new output.

Listening to Part Timer. Part Spacer for the first time I notice the album shoots off into several directions. Hard-driven guitar rockers, piano tinged ballads, 60s influence pop and garagerock songs, alternative indie rockers with those twists into disharmony and musical tensions on the verge between harmony and false. In short the kind of music that is unpredictable. No song is the same and within the songs anything can happen. Music that keeps me alert as not to miss the surprise that is offered next.

"If I ever want to kill myself" is the first line sung on the album. It's obviously meant as a sneer to a woman with a very huge ego. Large enough to jump off from, ending it all. The fun of the punky song makes it crystal clear: Mark de Jonge is not contemplating to end it all. He has found a new song with humour and panache. Those familiar with the band will recognise some The Kinks references in the song as well. 'Savage Cat Woman' is that kind of song that has a lot going for it.

The contrast with the second song is huge. 'Jean' is not an 'Ob-la-di-Ob-la-da', yet it has that effect because of the contrast. Only to be followed by the prickly 'Gigolo Pop'. A rough riff drives on an a-melodic song. The sound is harsh. At the same time the song has at least three changes within it. Including a marching disco beat moving into a new wave early 80s ending. Next up is a 60s influenced psychedelic song. To be followed by a song about a dress, lipstick and a hard on. 'A Girl And A Bike in Amsterdam' is a pop-psych 60s ballad.

I guess you get the picture. Part Timer, Part Spacer is an eclectic album. M-Jo has not held back on anything. He is following his own muse to where ever it takes him. A muse without any brakes and no lack of imagination. From The Velvet Underground to The Kinks, new wave, indie rock of the past decades, M-Jo lets it all come by and makes it its own. As I ended my review of 'Simple Life', "another interesting band to follow". Little did I know in January that come February I would be listening to the next album already. All expectations are fulfilled if not exceeded handsomely. Come April another album, M-Jo?

You can listen to and buy Part Timer. Part Spacer here:

Here's the link to our Spotify Playlist: https://open.spotify.com/user/glazu53/playlist/6R9FgPd2btrMuMaIrYeCh6?si=KI6LzLaAS5K-wsez5oSO2g
Gepost door Wo. op 09:05