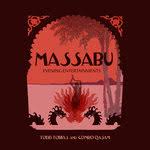 Deep down in the dark forests of Africa there is a party going on. Under the evergreens, tall, dark, filled with huge green leaves, the shouts of monkeys come from the trees while below between the adobe and thatch huts a huge fire is built, around which the tribe members dance in wild abandon. Working itself into a trance, spurred on by the musicians hitting everything that can be hit upon to produce a rhythm. Wild shouting from the ground is reproduced from the trees by monkeys and birds kept from their sleep.

Enter Todd Tobias and Combo Qassam. Hearing is believing what is happening on Massabu Evening Entertainment. (Instrumental) rock music is played with wild abandon, aimed pure at the dance instincts of humans and nothing else. Here and there a link with the exotic is laid, underscoring the imaginary village called Massabu where this music is supposed to be produced by Tobias and some friendly musicians.

Todd Tobias enters the music scene in the wake of Robbert Pollard of Guided By Voices in another band called Circus Devils. He plays on several latter GBV albums and several solo outings of Pollard, while releasing records with other acts as well. Involvement in and/or on 8 or 9 albums a year is no exception for Tobias. Not counting the 8 solo EPs or LPs he released between 2012 and 2016. A very busy musical man, since he entered the professional music scene around his 34th birthday. A full late bloomer it seems.

Come 2018 and I am exposed for the first time to Todd Tobias through Tiny Room Records that releases Massubu Evening Entertainment. In a way it is a very weird album. The story is weird, the music, slightly weird at times, the shouts are strange. And yet, after having played the record several times, I can only say that Todd Tobias has hit the big time some how. In a mix between Frank Zappa and De Kift his music just jumps around and produces loads of energy; rock and roll at its most primitive. Hank Mizell all over again, yet beyond this one hit wonder's wildest imagination. Todd Tobias has tapped into extremely primitive emotions to come up with a superb record that can guide anyone through the political fads and anxieties of 2018. The kind of music that makes people shut up and dance, while producing huge smiles along the way.

There are three options to do so in The Netherlands. The album is premiered with members of bands from the Tiny Room Records label. See below where you can go to.