Hail To The Rain. Maggie Brown 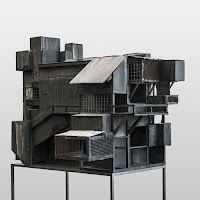 Three years ago 'Maggie Brown' was one of my favourite albums of the year. In 2015 singer Marcel Hulst released a solo album under the name Mountaineer, which did not make my end of year list. In hindsight it certainly would have, as I have played the album so often over the past years. And then .... silence. Until this winter when a sort of kickstarter campaign was opened in order to speed up the mixing process of a new album. The campaign became a success. The € 3.000,= mark was made and now we have a new single, preceding the album.

Hail To The Rain is sounding so familiar, straight away and yet it is different. The song has that beautiful, dreamy quality that accompanies most songs written by Marcel Hulst. Part of that dreamy state is his voice, that has a distinct, modest quality, yet is able to truly touch me. It is different because it is much more direct as well. The sound outburst brings the much lamented Johan to mind. Maggie Brown is able to bring a little extra to this song. The poppy addition makes Hail To The Rain irresistible to listen to. The clear sounding guitars, the pa-pa-pa-pa vocals all add to the experience of listening to a great pop song.

If this is the standard Maggie Brown has in store for us, it is going to be a very long wait until 1 July when 'Another Place' is going to be released with a release party in De Nieuwe Anita in Amsterdam*.

Maggie Brown had found itself a special place in my music collection. It's far from imaginary that it is going to find itself a few places higher still. Hail To The Rain is an absolute winner. A beautiful popsong that I find myself singing along to the whole of the day.

You can listen to Hail To The Rain here: