Every Place In Hell Is Special. Tim Claridge 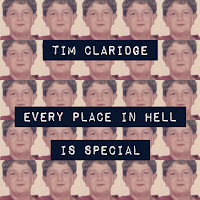 "I put an EP out to get some metal out of my system" the email Tim Claridge sent me said. O.K., metal usually means I take cover and hide until the storm is over. And so how come, I notice you asking yourself, is this guy writing right now?

That answer is so simple: This is Tim Claridge, people. One of the most talented, unsigned songwriters on this planet, as always accompanied by one of the best female singer/songwriters I know who is unsigned, Natalie Ramsay -together with Elenne May and Morgan Macaskey. Go look them up. So with this man I even get through his loudest song on the EP, 'Winter Is Coming'. The song that challenges everything head on, amp on 10 and guitars, loud guitars, all over the place.

Every Place In Hell Is Special. Now I never got through Dante but know enough of the nine levels that each level must be special in its own way. So the title makes sense in that way. Next to that, no album without a devil reference with Tim Claridge. The shortest route to hell is by following the quote the EP starts out with. I thought I recognised the voice and definitely saw the movie a few times. Long, but fantastic. Yes, that is Clint E. By the way, the man whistling in Ennio Morricone's soundtracks, Alessandro Alessandroni, died this week (while writing, Wo.).

Every Place In Hell Is Special is a special EP. Tim Claridge does not stick to one sort of music exactly. After the film quote an acoustic guitar played instrumental unfolds. An intricately thought out and built up arrangement is played. With more and more guitars and other things with strings are added playing either the same or totally different parts. In fact, this could have been in a Morricone spaghetti western soundtrack. Metal? Nowhere in sight for miles and miles. 'The Fifth Horseman' is closer to a madrigal from the Middle Ages than Metallica.

Things come to those who wait. 'Starving Con Artist' starts with an acoustic guitar also, but not for long. All hell breaks loose soon. I am introduced to Mike Hannay, (of Anciients) who is drumming like there's no tomorrow. Complimenting and driving Tim Claridge's wall of guitars. We are in Muse territory here. That might have been a problem, were it not that this song is great. A cello, violin and flute are added and an acoustic guitar, again. Showing the guitarist craftmanship of Claridge no little. The stark contrast within the song makes it breath and special.

The third song is more pop and blues oriented. 'Every Place In Hell' is another song where the basis is an acoustic guitar. Spanish guitar playing, fingers flying over the fretboard. Natalie Ramsay is there supporting the vocals as on the rest of the record. For a place that scares so many people, hell, this song has such a dreamy quality. It's too bad that a great, recent Dutch novel may never be translated into English. 'Harpij' is a great story about hell. So good that it's so easy to believe it is real. In the not-Hell parts of the book this song would fit just right.

The real storm Tim Claridge has left for last. His fingers are torturing the snares and frets of his guitar. In the long intro he gives it his all. Speed, accuracy, melody, variety, rhythm. It is, at least for a while, more a study in metal than a real song. All sorts of techniques come by, all supported by, again, some fierce drumming. And when after four minutes Natalie and Tim start singing together I am so ready for it. Listening to Natalie Ramsay's own music I ought to be surprised that she's singing here, but am beyond that for some time. Another and yet another guitar is added to the wall of sound. So huge it's easy to imagine smashing a car into it. 'Winter Is Coming' is huge, even on the first spring days of the year of our Lord 2017.

Every Place In Hell Is Special is a bit of a hodgepodge. Yet all songs have the quality I've come to expect from this artist. If this is just an in between EP I have to admit that I can't wait to hear the real thing. Lay it on me soon, Tim!