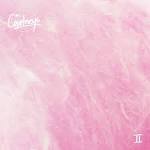 The Courtneys is a name that was singing around for a while, yet a band who's first album I'd missed. Through a live radio show I was warmed up to start listening in a serious way.

For those not familiar with the band. The Courtneys is from Vancouver in Canada and consists of three ladies called Courtney, although each actually has another family name to. A Canadian band with a contract at a New Zealand record label. That's globalisation for you. Not all is negative, folks.

What can you expect when you start listening to The Courtneys II? That answer is fairly straightforward, alternative rock with female singing. Not unlike many other records that were released in the past years. So, no grunge despite a guitarist called Courtney Loove or "Classic Courtney". Together with singer/drummer Cute Courtney (Jen Twynn Payne) and bass player "Crazy Courtney" (Sydney Koke) a sonic storm is created that makes sure that my ears do not get a lot of rest while listening to the record. It's not that this record is just noise, far from. The trio keeps up a strong pace to make sure the fire keeps burning throughout the record. All adorned with elementary melodies.

The beginning of the record is so strong. Despite the fact that nothing revolutionary happens, the feedbacking guitar tells all about intent. The drums and bass join before the guitar joins in the rhythm. The feedback sound reminds me of David Bowie's 'Heroes', Robert Fripp's lead guitar playing. All similarities end there. 'Silver Velvet' is a lovely alternative rocker, tending towards punk rock were it not that the guitar sound is kept at a more modest level. The girl/woman vocals give the song a sense of innocence, that the music belies. There's no innocence nor naiveté to be found here. It is exactly that mix that I find attractive to listen to.

As references I could start naming a lot of the other bands that were reviewed on this blog since its inception, but will refrain. Where things The Courtneys start is with the wilder, not the experimental, so wildest, side of The Velvet Underground. With songs like 'What Goes On' and 'Beginning To See The Light'. From there I'll mention Smashing Pumpkins, as long as that band played without the Overdrive on maximum. To this more alternative sound The Courtneys add a poppy element in the vocals.

To the alternative rock a lightness is brought by the voice of Jen Twynn Payne. She sings with a light sounding voice without trying to be sweet. Perhaps overdoing it just a little bit, to sound just a little meaner or more aloof than she really is. Like she sings in 'Virgo': "but I just don't care". Truth or posture?

There is a downside to The Courtneys II. The album is somewhat uniform in sound and play. To find out whether this was a true obstacle, I did a test. By starting the album halfway at song 6. Guess what? Problem solved. All the songs are attacked with the same zest and enthusiasm. Listen to how 'Mars Attacks' plays out. It starts out straightforward. Not much going on. Two guitars join each other other over a strongly kept beat. Slowly but surely a B-52s kind of song emerges. The Pearson-Wilson-Schneider wails are missing, but The Courtneys come close to the fun in song and lyrics.

So overlooking it all. No, The Courtneys have not produced a brilliant album, started and ended in feedback, and yet. "There's nothing to say, nothing to do, can stop me from thinking about you ... you're just the one I like". It's that kind of album. An album that helps one escape reality for a short while. With a song like 'Minnesota' on a record my day can't go wrong.

You can listen to and buy The Courtneys II here: