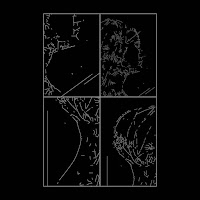 For quite some time I'm receiving messages from Rosan Rozema, pointing me towards what she's working on. A relationship that started after my review of the EP by her ex-band, The Future's Dust. (Read here: http://wonomagazine.blogspot.nl/2014/01/marrakech-ep-futures-dust.html) Three years have past since then. A fact that links her to another young band I reviewed early in 2014 (and in 2017), The Silverfaces, because both were seen by my girlfriend in DWDD, on tv. After which she tipped me to start listening.

Circa a half year ago I wrote about A Fugitive's first single, 'Penrose Stairs'. Which is also on this three song EP. The Future's Dust's EP, 'Marrakech', all but blew me over and guess what, I'm equally impressed by Coincidence. And then some extra.

The EP kicks off with a mysterious sound. 'Restless Coincidence' places A Fugitive in a position of being able to challenge Earth & Fire. The 2017 modern version, but somehow the song reminds me of some of the great singles of that band, like e.g. 'Memories'. 'Restless Coincidence' is a mix of modern electronics, beats and some great atmospheric guitar playing. A huge sound is the signature of A Fugitive here. The mood is perhaps more even than later on, yet dark. Like a 19th century Gothic novel, the mood spreads out over the listener. With one bright beacon of light: Rosan Rozema. Her clear voice, her enthusiasm gets to me each and every time.

I liked 'Penrose Stairs' last year, but it is not hard to admit to the fact that in the context of this EP I like the song even better. 'Penrose Stairs' is as dark as the cover of the EP. The voice of Rosan Rozema has a clear and positive effect though. She is positioned on top of it all and is in control of what is going on around or better behind and below her. Her voice is the main instrument of 'Penrose Stairs'. For someone caught on Penrose's stairs, she's admirably in control even. The song balances the EP in a nice way and is interesting in its own right. So many interesting sounds are going on in the background and foreground for that matter, that a lot is there to discover.

The final song, alas, after three songs it is all over, leaving a craving for more, 'Cortex Orbitofrontalis', "a prefrontal cortex region in the frontal lobes in the brain which is involved in the cognitive processing of decision-making", thank you Wikipedia, may start rather softly, but don't be fooled. A Fugitive makes a statement in the song of no small proportions. Full drums, a battery of sounds and loads of despair are poured out over the listener. Add some loud guitar underneath it all and voilà, a sonic storm is coming your way.

The beginning of 'Cortex Orbitofrontalis' brings The xx to mind. Mainly because of the echo effect on the guitar. That thought can be pushed back immediately after the true beginning. The directness of and attack with which the song is played takes that thought far from my mind. The song is flashed out in such a way, it doesn't leave room to whatever came before.

Now, a fugitive is someone who may have some hope for a better future. Yet in flight a fugitive looks fright in the eyes in multiple ways. All sorts of emotions are a part of a fugitive's journey.

In that way the name of this artist is well chosen. There's no stopping the emotions that the music shares with the listener nor the ones they evoke within him or her. It's impossible this music leaves someone untouched; for better or for worse. It doesn't provide the option of aloofness as this music is so dominant, so extremely in your face, that it may become uncomfortable for the less strong of heart. Struggle, strife, battle and a cry for "it" to spare "her". Right up to the moment that the music becomes even bigger, sung from a point of helplessness and despair, of not being in control over what is going on. And then it is all over, silence.....

'Coincidence' is just a three song EP, in my younger days that got the title Maxi Single, but what an EP. Monumental is the only word that is appropriate enough to cover what is achieved here. Greatness a good second. The use of dynamics is superb, creating an inner tension in the music, which A Fugitive releases each and every time in fine and delicate and in rough ways. Did I mention The xx? This EP trumps 'I See You' manifold. And that is a major compliment, I guess.

You can listen to and buy Coincidence here on Bandcamp: