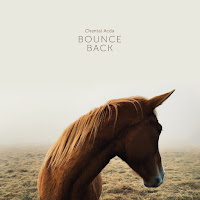 Chantal Acda so far was just a name to me. One of those names in music that comes by every once in a while, yet I can't remember ever having heard her music before. For one reason or another I associate the name with jazz and that usually does not trigger me to start listening. Another association was Thomas Acda and that isn't my cup of tea either. With her new album Bounce Back that all changed.

Look at the cover. I see a horse, face turned away from me on a patch of land with nothing but fog behind it. Clear, yet full of mystery or better the unknown. Anything could be behind that horse, including danger or just plain nothing. Who can tell?

It's a bit the same with the music of Chantal Acda on Bounce Back. Several songs have this kind of mystery surrounding them. Not all is clear on the album.

I wrote this part before reading the bio accompanying Bounce Back. Chantal Acda tells about the disassociation that comes with social media. Do people really connect any more or just tell about their (too) pretty side on Facebook? She wanted to go personal and left the large venues to play living room shows and connected with the people there. From the stories she heard there, this album slowly grew.

Chantal Acda is from Belgium and also plays in the band Isbells from Leuven. Bounce Back is her third solo album after releases in 2013 and 2015. On Bounce Back she ventures through several different musical spheres. There is a hint at folk, disguised under modern, atmospheric guitar playing and rhythms that are not necessarily straight forward. Another faint hint at pop is given here and there, again disguised behind what I can just as easily call modern classical music. Just like the music .No presents me with on 'Kairos', his radio show on Concertzender with e.g. Nils Frahm, Peter Broderick or Ben Lukas Boysen. Acda does not let herself be caught in a single corner. If there is a common denominator it is that mystery. That fleeting reality and mysterious sounds when surrounded by fog or snow for that matter. All sounds differently, more supernatural.

So expect guitars with a lot of reverb and echo, drums that play rhythms that do not necessarily seem a part of the song structure, but something added as an extra instrument, while a piece of percussion keeps the rhythm on track. Chantal Acda singing slowly, with deliberate words that can only be in that place at that point. The kind of music that befits a living room. Soft, modest, but commanding people to listen to the point of being able to hear a pin drop. If her aim is to do more living rooms shows she has the right music for that here. In large venues it will demand more attention than most people are able to summon these days. A live show is the new pub it seems sometimes.

A surprise is the intro to 'These Terms', especially after the extremely small song 'Stay'. It's like Rammstein is going to play 'Ohne Dich'. That mood is lifted for, again an extremely small song. An acoustic guitar playing slow chords, some atmospherics in the background, a voice. That mood morphs into something bigger soon, when a busy drum is added and strings enter more prominently with an electric guitar.

Acda, the guitar and the drums are the horse, all going on in the background is the fog. I realise that the drums remind me of the role of the drums on Bowie's 'Black Star', almost set free and omnipresent.

Variation is a word that is not in abundant supply on Bounce Back. To find it one has to work hard, pay attention and leave outside impulses behind. Anyone not able to do so will not find the cello in 'Our Memories', the intricate guitar playing, the horn section that comes in near the end. Probably only that the mood changes during the outro of the song. The fun of Bounce Back is in the small details. Each song offers some, making Bounce Back an album to truly enjoy in solitude. An album for two: you and the album, preferably on a headset. It seems like Chantal Acda has succeeded in her quest for disassociation.

You can listen to 'Fight Back' here: