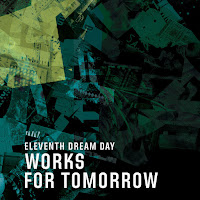 Works For Tomorrow starts fairly normal. A long intro of driving guitars, drums and bass. Somewhat indie, punky, but nothing out of the ordinary. Nothing much prepared me for the kick in the teeth singer Janet Beveridge Bean produces when she really starts singing. She totally goes wild at a certain point in 'Vanishing Point' setting a high level of expectations for the rest of Works For Tomorrow. Is that level met?

To my surprise Eleventh Dream Day exists for 32 years and this is the very first time I'm exposed to the band that released its first EP in 1987. 12 Albums preceded this one. Be it my first, it leaves something to explore, as this is some first album to be exposed to. Coming from Chicago, the band is completed by guitarist and co-lead singer Rick Rizzo, bassist Doug McCoombs. Mark Greenberg plays all keys. Live there is a second guitarist, Jim Elkington.

The music on Works For Tomorrow has a punky undertone and sometimes more than that. On top of that a lot can be heard. The almost inevitable The Velvet Underground is there, but then so are so many other sounds and bands that followed down the years, right up to Band of Skulls. It is much more interesting to focus on this album, but now you have some references.

Works For Tomorrow is totally raw. There is no holding back at times, although some of the songs at heart could be played in a totally other idiom. Feedback can be found in many places on the album, from which a blistering intro, pounding guitar strums or solo grows. The songs can be as monotonous as The Velvet Underground's, but are so alive. Eleventh Dream Day manages to find the melodies despite the chords are sparse and that makes a song like 'Go Tell It' extremely exciting. Actually it is totally wow.

The great thing about this album is that the storm does not lie down, without losing tension. There is no too much of a good thing on Works For Tomorrow. The band manages to work around some clichés in the genre by really kicking in some effects. Playing guitar like riding a rodeo without ever losing control. Feedback is a dangerous tool to work with as a musician. Before you know it all are covering their ears or start running away. No such thing here.

Moving on into the album a final reference comes to me. The loud Neil Young can certainly be mentioned. Even a little in the way Rizzo sings. (Like Young) both Bean and Rizzo are not great singers. No lead roles in a choir here. Both their voices fit the music of the band, where Bean has to strain a little more at times.

There is no real need to single out songs. All are at a pleasantly high level. Sometimes even played at a subtle level. I'm entertained and have discovered a great band. Time to search backwards.

You can listen to 'The People's History' here: