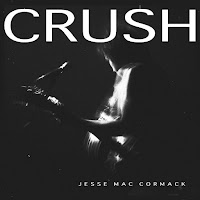 Jesse Mac Cormack made an impression of some kind as support act to Sophie Hunger early December at Tivoli in Utrecht. Not that I was totally convinced. His presentation and the intensity with which he played his songs, did make me curious for more. At the show he sold two EPs and this is one of them.

Jesse Mac Cormack is from the Canadian city of Montreal and used to be the front man of the band Mak, before he decided to go at it alone. Listening to Crush I all of a sudden get it why they let this man play support for Sophie Hunger. They are sort of soulmates. Mac Cormack is able to lay the same musical undergrowth in his music, giving it something mysterious with a hint at the magical.

On this four song EP he does everything except presenting himself and his music as ugly as possible. (See my review of his show.) Far from even. The intensity is there though, although the distance between me and the artist on record is huge and can well account for that.

I remember he played 'Ask For It', the opening song of Crush. The dark song comes close to his live performance. The distorted guitar sounds gritty and dirty. Supporting all the things the singer did not ask for but happened any way. Later a second guitar enters. The mood changes again when a section comes by in which the voice is only supported by percussion. The mood becomes more tense, the things happening to the singer intensify also and turn into an ugly dream. The music underscores that in an almost terrifying way. The song fleshes out more and more, grows and grows in several ways, one of which certainly is greatness.

At this point into the EP I am already hearing what I had hoped to hear on the basis of his show. Although it may all sound lo-fi and elementary, Jesse Mac Cormack comes across as an authentic voice. On record just this little less confronting and more (a) whole.

'No Other' is another song that only has the bare necessities, yet is so rich in sound. All these little things go on in the corners of the song. Percussion, notes on the guitar crawl around like bugs in the dead leaves underneath the hedges or become more prominent like a hedgehog would among the same leaves. And then that undercurrent on a keyboard comes in suggesting the same mood that Sophie Hunger has on her record 'Supermoon'. Dead serious 'No Other' is if not from the nether world itself. In a way the song is scary.

The same goes for 'Too Far Into'. A song that goes down to the marrow. Again intense, sung with a high voice and only those notes are played that are truly necessary. Drums, sonic storms hover in the background. Perhaps played at earsplitting level in the studio, but mixed way in the background like a thunder storm on the horizon that may or may not come your way. In 'Too Far Into' it does reach me. Everything and more pours over me. A song to submerge into and surrender oneself to.

It all ends with 'He Knows' and by then I do know that Jesse Mac Cormack is a talent who makes the sort of music that will never make him famous, but stands out in many ways. 'He Knows' is a ballad and a much kinder song than the other three. The fingerpicking is more traditional. It is the keyboard that lays the by now familiar threatening atmosphere over the song. Again making a song special.

You can listen to 'He Knows' here