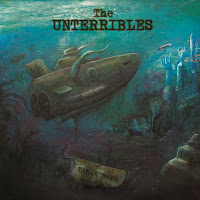 The Unterribles? What kind of name is that for a band? A strange one, but then who care if the music is o.k. I saw The Unterribles last August as support act of All Comes Down. At the time I did not write about the band as I expected to write on the album I bought soon. That never happened. Takin' Over sort of got on that pile of records on the to do list and fell off somewhere in the past months. Time to make up. While summing up 2015 I ran in to a few albums that I decided to give a (second) listen to to review early on in January. The Unterribles made that cut. It even comes first, in December.

The Unterribles, from Noordwijk, is around since 2010 and has a previous album to its name, 'Van Vuigorcum'. Takin' Over was released in april 2015.The band members are: Robby Caspers, guitar and vocals; Roy Hoogervorst, guitar and backing vocals; Rolf Valkema, bass and backing vocals and P.B. Maiburg, drums. On stage it seemed to me that Caspers had three people playing for him. As his ego seemed a lot larger than the others'. Hoogervorst was allowed to excel in the solos though. Certainly in the great riff of 'SleepLarper', which impressed me a lot at the time and does so again on record.

Takin' Over was recorded by Caspers Sr. Taking into account that this is a DIY recording the fan has nothing to complain about. The rock of many feathers comes to us clear in sound and catching the deep rock riffs in all the right ways. This is just what The Unterribles is, a rock band that shows all sorts of influences from late 60s and 70s hard rock right up the grunge of the 90s. The sort of rock that always remembers that a song needs a melody, a recognisable riff and a head and a tail.

Those following this blog know that hard rock is not the sort of music that gets a lot of attention on this blog. The fact that Takin' Over gets a spot is telling. The Unterribles seem to pick out those elements from rock's history that appeal to me and add some fun little elements that make some of its songs stick out.

For one The Unterribles are able to play within the context of the song. 'Desert Song' has many a twist and some great dynamics. Without creating a mess of moods the band came up with parts that make the listeners curious for what to expect next. Another example is where the sound and style of The Cult's lead guitar (ist, Billy Duffy) is recreated ('Minotaur').

What necks The Unterribles is when Soundgarden comes around. Not that the composition is lacking in quality. It's the deepness of the sound that is not matched. Perhaps it is the difference in production options that is to blame here. On Takin' Over it is not the music that is very original. Fans of the genre may be able to mention a thousand guitarists who are better, but I like the guitar playing here. There are some great riffs and solos to enjoy.

Finally some complements for the artwork by J.P. Maiburg and his partner Robert Dines at Suitupstudio. They really put some effort into making this cd stand out.