Another Half Life. And The Golden Choir 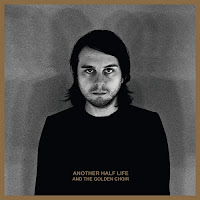 This album was on my to do list for some time. Each time again I listened to it, but did not start writing. I was intrigued, but every time I listened I did not really get a grip on, could find a way into writing. The music is as elusive as the shadows on the sleeve. So where to start?

So let's start simple. The person in the cover picture reminds me faintly of Tim Christensen. Why not, it's as good as any start. Musically the music isn't though. To my surprise Tobias Siebert, who is And The Golden Choir, is German and active since 2000 in bands, as producer, in a long list of productions. Siebert is a member of the band Klez.e and plays guitar in the band Delbo and owns a record label called Loob Music. How much can a man do without me noticing anything he has done so far, at least for as far as I'm aware? A lot it seems, considering the fact I tend to keep up with music in a modest but active way.

Another Half Life is his first album under the name And The Golden Choir after releasing two EPs previously. The music reminds me mostly of Radiohead of the more spacey, floating kind. Not the latter art rock Radiohead. It has the same dreamy qualities as 'Kharma Police'. In the singing sometimes David Bowie shines through, but minimally.

Another Half Life starts a capella in the title song. Siebert sings with himself in a few layers in slightly deeper regiment of his vocal range and as laden as if in church. This vocal with a touch of sacredness is the intro to an album that, taking it all in, can be characterised as serious. Directly into the first song with instruments, 'The Transformation', the Radiohead quality with Bowie vocals presents itself. Next to this the song has an inner beauty that shines through easily. The seriousness that is on top of it all allows for the beauty to flow freely.

A notable moment is 'My Brothers Home'. A serious, sad song that has something uplifting none the less. That small change in the chorus works a miracle for the mood of the song. Something that was very well done with a lot of feeling put into it. The trick seems simple, just add some more stamina and instruments, but is done in exactly the right place and the build up is fantastic ending in one of the most jubilant pieces on Another Half Life, without losing the subdued seriousness for a second.

The moment Another Half Life starts to lose my attention, as in a fear for too much of the same, And The Golden Choir positions the piano even more prominently, as in higher register notes and "an Abba" way of piano playing, into the music, shifting the predominant mood of the album, varying in all the right places. The piano does not only grace the songs but now colours them as well. They add a lighter touch which brings songs like 'New Daily Dose' and 'Choose To Lose' very much alive.

Having said that, Another Half Life is a darkish album. Moody and without a show of open joy. At the same time this album celebrates the joy of making music. Listen to the light touches that were woven into 'The Hunter Of Soul'. Higher notes mixed left and right from the elementary percussion in the middle. A sad, even desperate song with inner beauty on all sides.

For those who are not afraid of some sadness and despair there is a lot to enjoy on Another Half Life. And The Golden Choir has released an album that is not one to instantly like, but very much worth the investment of establishing a relationship with.

You can listen to 'Dead End Street' here: